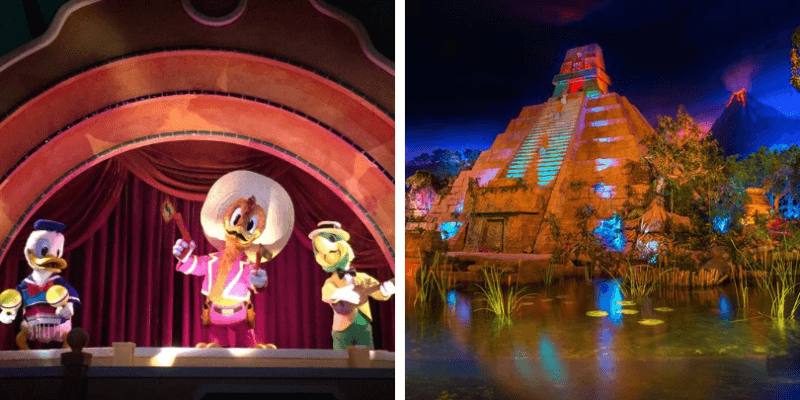 Jose is back at the Gran Fiesta Tour!

As many Guests have seen, Jose Carioca of the Three Caballeros had a little too much fun at the Fiesta last week and decided to take a siesta (which means nap in Spanish).

Speaking a little more frankly, one of the animatronics at the Gran Fiesta Tour Starring The Three Caballeros Attraction at Walt Disney World Theme Park EPCOT, fell over some time during the day last week.  Though typically Disney tries to remedy issues like this before it deters from the magical experience for Guests, this guy was caught red-handed sleeping on the job.

But it looks like today, ten days after the incident, Jose has gotten enough rest and is now all fixed up.  He’s back making appearances on the Gran Fiesta Tour!

Walt Disney World Guests are sharing in excitement over it, because the whole situation gave everyone a good chuckle, and Disney fans took to social media and comments with some pretty hilarious comments.  Though certainly not a fun situation for EPCOT Attraction technicians, as they say, the show must go on, and it’s going on the way it should now.

Jose is back at Epcot! pic.twitter.com/VB1Bv4dHks

As Disney describes the ride, “Take in the sights of Mexico and the antics of 3 feathered amigos on this gentle boat ride through the Mexico Pavilion.”  Those were some antics, alright.  If you want to experience the ride in its normalcy, but can’t get over to EPCOT yet, we have a solution for you!  Take a virtual ride through of the Gran Fiesta Tour with this video below, maybe with a Churro or Churro Toffee in hand to really feel like you’re at the Mexican Pavilion at EPCOT!

If you need help booking your next trip to Disney World, don’t hesitate to reach out to our friends, the Authorized Disney Vacation Planners at Academy Travel!

Comments Off on Missing Animatronic Returns to EPCOT Attraction