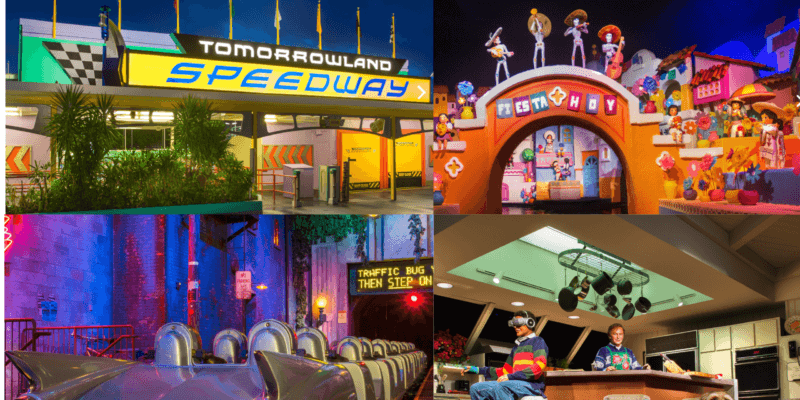 Here are five attractions at the Walt Disney World Resort that feel a little outdated and could do with an update.

The Tomorrowland Speedway only recently came out of a lengthy refurbishment in 2019 and while we absolutely love the overlays the attraction gets (especially during the festive period), the fact that you sit in a gas-powered car while driving around Tomorrowland doesn’t feel very futuristic anymore.

With TRON on the way to Tomorrowland, we think now is the time for Disney to give the attraction a bit of an update. While it could be costly, replacing all of the vehicles with an electric version would be a good start. If Disney wanted to go the extra mile then they could be themed to Light Cycles from TRON for an even more futuristic feel.

In my opinion, this remains one of the best attractions to ride if you just want to laugh nonstop and I’d be gutted if the Tomorrowland Speedway went away forever, it just needs to be brought into the right century!

While the attraction did get a lick of new paint back in 2016, little has changed since 1993 when the overall theme of the attraction shifted to include the cogs and new signage and the “futuristic” scene was added. This was truly futuristic back in 1993 when it was a vision of what the year 2000 would look like but now the technology featured in this section of the attraction is all invented and in everyday use!

Just like the Tomorrowland Speedway, we don’t want to see Walt Disney’s Carousel of Progress go, just an update to some of the animatronics and a new glimpse into the future.

The attraction has had a few minor refurbishments over the years with the last being in 2016, but very little has changed since the attraction was first introduced back in 1999. While the ride system still holds up to this today, we knew the time was perhaps coming to an end with Aerosmith when last year we heard a Guest ask “What is an Aerosmith?”

Related: Learn How To Create A Model Roller Coaster System Right In Your Own Home

Disney has already made the decision to change the attraction in Disneyland Paris to get an Iron Man theme, and it could be time for a new vision for that side of Disney’s Hollywood Studios.

The guys are unlikely to go anywhere just yet with Disney reigning in the budget for existing projects (notably EPCOT) but we’d expect a big change at the attraction once Iron Man is open in Disneyland Paris and they get guest feedback. While Iron Man is very unlikely to happen in Walt Disney World due to the agreement with Universal and Marvel, it’s not impossible to see other Marvel characters in the space. Captain Marvel, anyone?

The attraction was last changed in 2015 when Disney added the Panchito, Donald, and José animatronics from Mickey Mouse Revue. While it has been great to see a piece of Disney history included in the attraction over the last five years, the attraction feels pretty dated given it only opened with the new overlay back in 2007.

So how could Disney refresh this attraction in the Mexico Pavilion? Theme it to Coco! The film is a beautiful tribute to Mexico and does a much better job at respecting the culture than The Three Caballeros do currently. We’d love to see a Coco boat ride at Epcot.

The attraction last saw a big update back in 2008 when the fourth edition of the ride opened with Dame Judi Dench narrating.

Spaceship Earth has admittedly seen better days and regularly has to shut after heavy rain due to it leaking. In addition, the ride vehicles are certainly in need of a bit of a refresh. Disney knew this and announced at D23 last year that the attraction would be seeing an exciting new update as part of EPCOT’s 40th-anniversary celebrations.

Unfortunately, Disney recently announced that the update would be put on hold for the time being and with no news on when this would be proceeding, Spaceship Earth will remain as it is, for now.

If you’re thinking about booking a trip to Walt Disney World soon then why not get in contact with our good friends at Academy Travel. No matter what your Disney Parks needs. the team will be able to help you to book your next magical vacation. Contact their team now for a free quote!

What outdated attraction at Walt Disney World would you like to see updated? Let us know in the comments below!

Editor’s Note: The opinions related to the retheming or refurbishment of attractions expressed in this article do not necessarily reflect those of Inside the Magic overall.