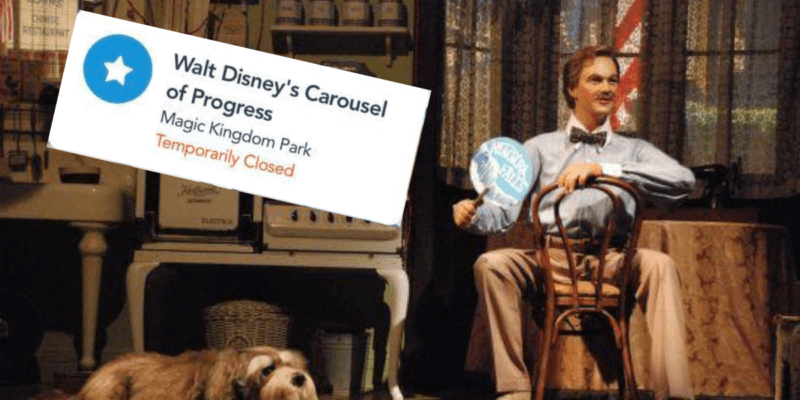 Walt Disney’s Carousel of Progress in Magic Kingdom park is down for unknown reasons. Tomorrowland’s rotating theater audio-animatronic stage show attraction has been reported closed for most of today, July 30, and the My Disney Experience app confirmed this news.

It is unknown at this time how long the attraction will be down. We at Inside the Magic will continue to update this story as more information comes to light.

Now, this attraction could be due for some refurbishment. We have covered a few stories lately where the original Walt Disney has faced some notable glitches. One of the latest being when John, the animatronic narrator, had his hand come flying off mid-show.

However, Walt Disney World has not yet announced that its beloved Magic Kingdom show is closed for refurbishment or that its schedule is unavailable beyond today.

The show originally debuted at the 1964 World’s Fair and prides itself in being the longest-running show in American theater. Added to Disneyland park in 1965, the show was moved to Walt Disney World Resort in 1975 where it was reworked to replace its iconic anthem “There’s a Great Big Beautiful Tomorrow,” with the new “The Best Time of Your Life.” The original song was put back in the show in 1994, and you can still hear the tune playing in Tomorrowland’s ambient music.