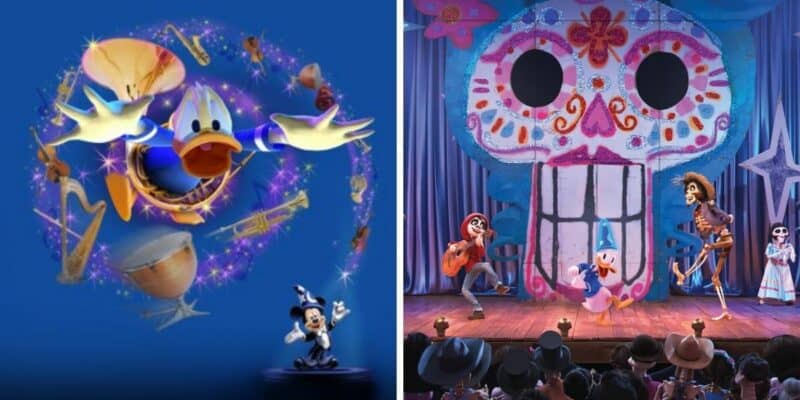 Not long ago, it was announced that Mickey’s PhilharMagic at both Walt Disney World and Disneyland Resort will soon include a new scene featuring Disney and Pixar’s Coco!

Now, as we inch closer to the official debut of the new scene in Disney World’s version, a new permit has been filed for the location of the attraction.

For starters, in case you are not familiar, Mickey’s PhilharMagic is a classic attraction at both Walt Disney World Resort in Orlando, Florida and in Disneyland Resort in Anaheim, California. The incredible 3D adventure stars some of our favorite classic Disney characters including Mickey Mouse and Donald Duck as they get ready to put on an incredible orchestra. However, Donald decides to put on Mickey’s sorcerer hat and things get a little out of hand.

Now, as we mentioned earlier, Guests will be taken into a Pixar film for the first time ever as Mickey’s PhilharMagic at both Walt Disney World and Disneyland Resort will soon include a new scene featuring Disney and Pixar’s Coco!

The new scene will take Guests into the iconic song, “Un Poco Loco”, and already debuted at Disneyland’s version on July 17. For those of you who are visiting Walt Disney World in the near future, the new version will debut later this year — in time for the 50th celebration, which will kick off on October 1.

Now, as we are less than one month away from the start of the 50th anniversary, Disney has filed a new permit for the location of Mickey’s PhilharMagic to provide labor, material and/or electrical for construction. Now, this could mean something as simple as repainting a small section of the building, but since we know Disney plans to update the show itself, they could also be thinking about redoing other aspects of the theater. This could mean fixing any seats that may be weathered, repainting certain aspects of the lobby or theater, or anything else that may need to be done that could help enhance the Guest experience once the new Coco scene debuts.

If you want to visit Disney World to see the new Coco scene on your next vacation, start planning today!