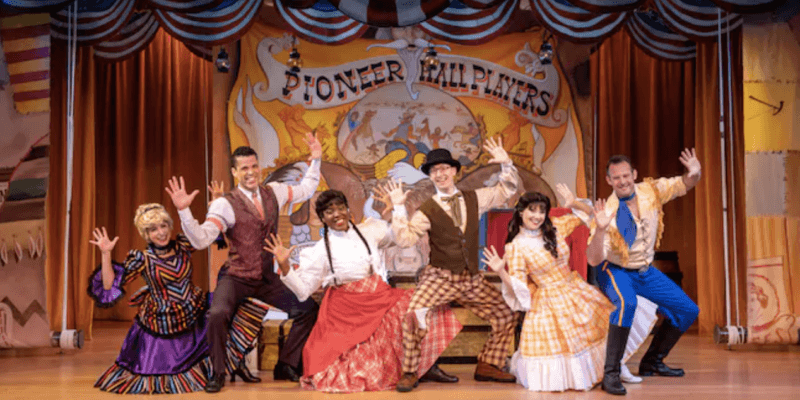 I was one of the lucky Guests who snagged a reservation for the very first show, and here are my thoughts.

Guests checking in for Hoop-Dee-Doo Revue can now do so via the My Disney Experience app 30 minutes prior to the show. Once you check in, you will receive a text to meet with a Cast Member at the check-in desk to get your table number.

After you receive your table number, you will wait in front of Pioneer Hall for the dinner bell to be rung and then a Cast Member will bring you to your table, where the starters are already waiting for you!

Overall, the check-in process was extremely smooth and quick.

The Food at Hoop-Dee-Doo

Hoop-Dee-Doo announced they would have an updated menu. Though the iconic staples are still offered, the menu has added Mac and Cheese as well as new alcoholic beverages for an added cost.

We opted to enjoy the bottomless white sangria rather than one of the new cocktails, but the white sangria was just as good as it was in years past.

For starters, we received the fan-favorite corn bread with butter, a tossed green salad, and coleslaw. The corn bread was moist and flavorful, we ate nearly the entire loaf!

The salad was fresh and consisted of shredded sharp white cheddar, cucumbers, and tomatoes — all topped with the signature “hoop” vinaigrette (it was delicious!)

And what’s a BBQ without Cole Slaw? Unfortunately for me, this was just mediocre. The Cole Slaw was a bit soggy and the dressing was slightly on the watery side, but there was a nice touch of seasoning which stood out.

For dinner, Hoop-Dee-Doo still offers the staples — Pecan-smoked BBQ Pork Ribs with BBQ sauce on the side, and the Legendary Fried Chicken. I did not try either of these as I am a pescatarian, but my husband said both were absolutely delicious and just as good as he remembered.

As far as sides go, Hoop-Dee-Doo still offers the Mashed Potatoes, which were buttery and creamy, as well as the famous Cowboy Beans. In addition to these, Hoop-Dee-Doo added Cornbread-crusted Macaroni and Cheese, which honestly, I was a bit disappointed with. Though the Mac and Cheese was creamy and had some flavor, I miss the old Mac and Cheese that you had to ask for.

I also felt like I was missing a vegetable. I should have asked for one (or asked for the vegetarian option), but if I am being completely honest, I was already so full from everything I ate (plus the sangria) and I wanted to save room for dessert. (Maybe next time).

And of course, there’s no Hoop-Dee-Doo experience without ‘Ma’s Famous Strawberry Shortcake! I felt this time around the Shortcake was more moist and flavorful than I remember in years past, but the whipped cream still tasted a bit fake to me.

The script had very minor changes to it, but what made it better was the updated light and audio system! The cast even cracked some jokes about the updates the stage had throughout the show, which was a great touch.

The cast still begins the show by banging on the doors and barging in through the audience, right before singing the iconic “Hoop-Dee-Doo” song.

They all still got along so well, and tended to go off script laughing or playing to the audience members, which is what makes this show so unique and iconic. Every single time you go, there will be some minor differences based on how the audience interacts with the cast and vise versa.

Guests can still look forward to iconic parts of the show such as “Oh My Darling, Clementine”, “Davy Crockett”, and more.

Overall, I would still recommend this show to anyone visiting Walt Disney World, whether you are a first timer or a returning Guest!

Have you been to Hoop-Dee-Doo? Let us know in the comments below.