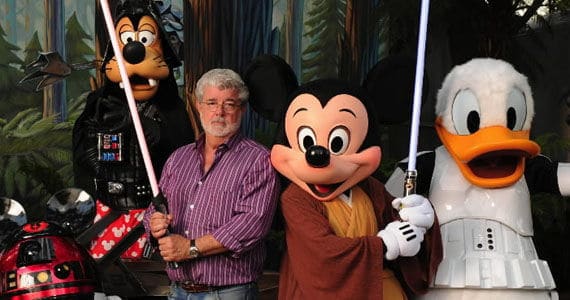 One Star Wars fan has made it clear they are tired of fans begging Disney to bring George Lucas back after forcing the legendary director to give up his franchise in the first place.

This “revisionist history” isn’t something new for Star Wars fans as the fandom has been very hostile towards any changes to the Original Trilogy. When George Lucas went to create the Prequels, he admitted to his team at Lucasfilm that he was going to create a story “nobody liked” and he was fine with that:

“I told people at Lucasfilm that they’re going to have to face the reality that I’m making a movie that nobody wants to see, but I want to tell that story. I’m more interested in telling the story than I am in just doing a franchise where you tell the same story over and over again.”

Lucas also made it clear that the Prequels weren’t just going to be Vader going crazy the whole time:

“I know everybody wants to see Darth Vader in his black suit with his lightsaber, but the whole point of it is: How does this nice little kind kid, who has good intentions, is just like us, go wrong and become Darth Vader?”

After Disney has handled the franchise poorly these past few years, fans have started to change the narrative and want to give Lucas full creative control again. Ironically, the fans were the reason, Lucas gave up on Star Wars and sold the rights to Disney.

One fan, MaceAhWindu exposed Star Wars fans by sharing old videos and art created describing how Lucas “raped their childhood” and ruined Star Wars for them:

I’m so tired of this revisionist history saying that George Lucas was always loved and appreciated for making the prequels. Respectfully, some of you might have been too young to remember, but it was a bloodbath for from 1999 until about 2011.

I’m so tired of this revisionist history saying that George Lucas was always loved and appreciated for making the prequels.

Respectfully, some of you might have been too young to remember, but it was a bloodbath for from 1999 until about 2011. (Thread)

Here are a few of the things that were attached in the thread:

Due to the backlash, Lucas admitted that he decided it was better to raise his daughter rather than work on another trilogy that would be hated by fans once again:

“In 2012, I was 69. So the question was, ‘Am I going to keep doing this for the rest of my life? Do I want to go through this again?’ Finally, I decided I’d rather raise my daughter and enjoy life for a while. I could have not sold Lucasfilm and gotten somebody to run the productions, but that isn’t retiring.”

So when fans complain about Disney’s rule over Star Wars and ruining the franchise, nothing has changed. It doesn’t seem to matter who is in charge of Star Wars. Perhaps Star Wars: Episode VII — The Force Awakens (2015) leans so hard into nostalgia because of the hatred towards the Prequels at the time.

Fans wish things were different, but it’s hard to imagine things being better if Lucas directed a Sequel Trilogy since fans will still claim it ruined Star Wars.

Do you think George Lucas made the right call by selling Star Wars to Disney? Let us know what you think!