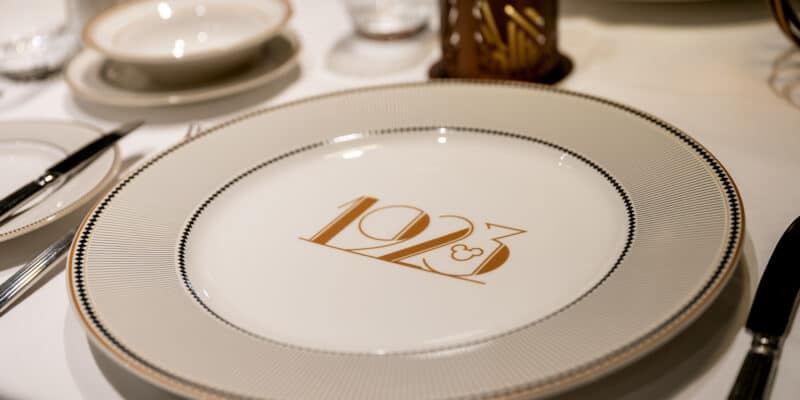 As Disney Cruise Line’s fifth ship readies for its maiden voyage on July 14, we got a first look at two brand-new dining venues that will celebrate Walt Disney’s legacy aboard the Disney Wish, giving Guests a new way to experience the magic of a Disney vacation at sea.

The Disney Wish is a celebration of nearly 100 years of enchanting Disney stories and will be filled with one-of-a-kind experiences inspired by Disney, Marvel, Star Wars, and Pixar adventures. This makes the ship a perfect embodiment of the spirit of forward-thinking innovation and visionary storytelling heralded by Walt Disney himself.

Imagineers took inspiration from the creative hallmarks of The Walt Disney Company to celebrate this legacy in the design of two beautiful dining venues: 1923 and Marceline Market.

The elegant venue combines classic Hollywood glamour with a dash of Disney whimsy, providing an inside look at the evolution of Disney animation. The walls and ornate glass cases around the restaurant will be adorned with more than 1,000 drawings, props, and other tools of the trade, showcasing 16 Disney films that embody the ship’s themes of enchantment and wish fulfillment. Many of these stories also hold a significant role in the history and legacy of the company, such as:

The menu at 1923 pays tribute to the company’s roots in California, with sophisticated dishes inspired by the fusion of cultural flavors found throughout the Golden State. The diverse menu will mirror the region’s unique blend of Asian, European, and South American cuisines and a superlative selection of world-famous Napa Valley wines.

The stylish food hall aboard the Disney Whish is named after Walt’s most formative years, when he was a young boy growing up on a farm in Marceline, Missouri. This is where Walt developed a love for animals and steam trains, themes that continue to influence Disney films and theme Park attractions, and it’s also the inspiration behind Main Street U.S.A. at our parks around the world.

At Marceline Market, Guests will be able to enjoy casual, walk-up dining throughout the day, with ten food stalls themed to a beloved Disney animated story, from classics such as Alice in Wonderland (1951) to more recent films like Zootopia (2016). This fun design twist presents favorite characters as honorary “shopkeepers,” offering a wide-ranging variety of freshly prepared cuisines for the whole family to enjoy, including American classics, international specialties, comfort foods, seafood, soups, and salads, vegetarian and plant-based fare, baked goods, and desserts.

These unique dining venues are just a taste of the incredible experiences and immersive storytelling awaiting Guests aboard the Disney Wish.

More on the Disney Wish

This historic moment has been six years in the making and included classic Disney-style fanfare, beloved characters, and, of course, the iconic and fanciful “When You Wish Upon a Star” pouring from the ship’s horn as the Disney Wish sailed into port for the very first time.

Disney Parks (@disneyparks) posted a video of this emotional moment on their TikTok account. You can see the video below or click here to watch it.

The Disney Wish will sail year-round from Port Canaveral, offering a series of three- and four-night Bahamas cruises to Nassau and Disney’s private island oasis, Castaway Cay, beginning July 14. For more information, visit disneycruise.com. The ship will be joining the Disney Dream, the Disney Fantasy, the Disney Magic, and the Disney Wonder in the Disney Cruise Line fleet.

We recently reported the ship would see Marvel’s newest superhero, Ms. Marvel, joining forces with the Avengers on board the brand new Disney Cruise Line vessel in “Avengers: Quantum Encounter,” a first-of-its-kind dining experience that will allow Guests to be immersed in the MCU.

The ship will be flooded with activities and areas to explore, just as unique as the suite itself! Captain Minnie and Mickey Mouse will greet you. On top of that, Guests can team up with Moana to navigate their canoes beyond the reef, helping Tiana cook up the perfect pot of her father’s favorite gumbo, summoning Tinker Bell to give the Disney Wish an extra dash of pixie dust, and diving into the East Australian Current (EAC) with Nemo and friends, as well as Marvel fun! Check out more of the offerings below!

We also recently learned that Disney Wish would debut two new shows — Disney Seas the Adventure, featuring Captain Minnie, and Disney The Little Mermaid. There will also be a luxury Wish Tower Suite! The room will have Moana accents to it as well as two master bedrooms, a kids bedroom with built-in bunk beds, and a library that can be transformed into another bedroom if needed, as does the Cinderella Castle Suite, as well as access to a personal concierge team, and more.

Are you excited to see the Disney Wish set sail? Let us know in the comments below!