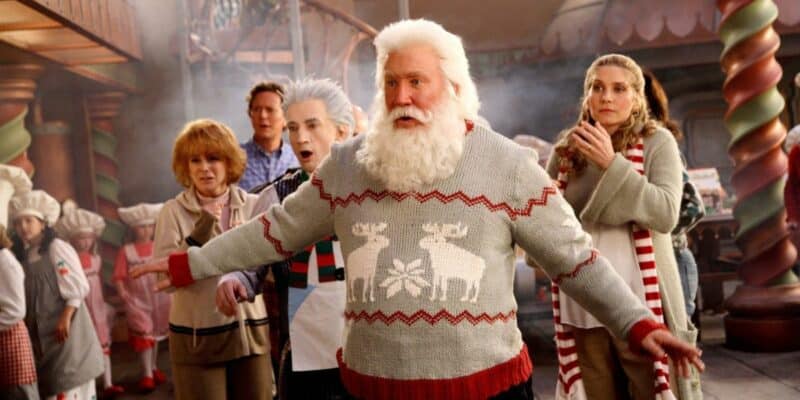 A few months ago, it was announced that Disney was working on a limited series based on The Santa Clause movies. While they’re hardly considered Christmas classics, news of Tim Allen’s return as Scott Calvin/Santa Claus felt like Christmas had arrived very early.

Shortly after, it was confirmed that his co-star from The Santa Clause 2 (2002) and The Santa Clause 3: The Escape Clause (2006), Elizabeth Mitchell, would also be reprising her role as Carol Newman/Mrs. Claus.

More recently, we learned that Tim Allen’s real-life daughter, 13-year-old Elizabeth Allen-Dick, had been cast as his on-screen daughter, Sandra. Now, the latest news has left us wishing the rest of the year away, seeing as the series is set to arrive on Disney+ before Christmas.

Tim Allen has taken to Twitter to share the first ever set photo from the upcoming Disney+ series, beneath a caption that reads, “Might just be a photo of Santa Claus’s office but don’t tell anyone….”. Check out Allen’s festive Twitter post below:

“Might just be a photo of Santa’s office but don’t tell anyone….”

It sure looks like Christmas has come early, as this is clearly a shot of Santa Claus’s North Pole office, which we’ve already seen in all three The Santa Clause movies – although it looks like it’s been given a slight makeover since we last saw it in 2006 (and no doubt a good clean too).

The official title for the show is The Clauses (TBA), which makes sense given that it will focus on Scott and Carol’s family, as they struggle to raise their children, manage the unenviable task that is Christmas from the North Pole, and find an eventual replacement for Scott Calvin/Santa Claus.

Here is the official synopsis for The Clauses:

The series will be directed and executive-produced by Jason Winer, who is best known for the hit US sitcom Modern Family (2009). Jack Burditt, whose name is associated with equally popular sitcoms 30 Rock (2006) and Frasier (1993), will serve as executive producer and showrunner.

This isn’t the first time Disney has taken one of their own movie franchises and adapted it for Disney+ — The Mandalorian (2019), The Mighty Ducks: Game Changers (2021), and Monsters at Work (2021) are just a few examples. Upcoming projects include Zootopia+ (2022).

The Santa Clause Trilogy is now available to stream on Disney+. The new series started shooting in March and is expected to begin streaming later this year.

Are you looking forward to The Clauses? Let us know in the comments below!