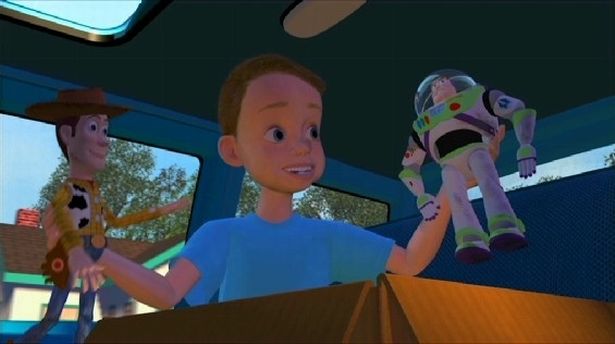 It’s a worrying moment; when Woody first realizes he’s got stiff competition for Andy’s #1 toy, jealousy gets the better of him. But what happened to Andy to suddenly put Buzz at the forefront of his playtime? The answer is coming up in the new PIXAR movie, Lightyear, the Buzz Lightyear biopic.

Andy Watched Lightyear Growing Up – It’s Why He Loves Buzz

While Toy Story 2 (1999) details Woody’s origins, Buzz’s starting point really started in his box. We’ve seen a commercial for his action figure, but where did that come from? Lightyear is going to fill in more of the story than we’re anticipating, according to its director, Angus MacLane.

The pop magazine Fandom “took part in an early press preview of footage from the film, mainly focused on the first act and, as it turns out, Lightyear (which stars Chris Evans as the voice of the title character) begins with onscreen text explaining its set up: Lightyear is the movie that Andy Davis from Toy Story adored that led to him becoming obsessed with wanting a Buzz Lightyear toy in the first place.”

What’s fascinating is that while Toy Story came out in 1995, Lightyear supposedly came out ten years earlier. The sci-fi movie was captured on VHS and entertained Andy regularly while he was growing up. The 1985 film became a classic in the Toy Story universe, spawning Buzz fans for years to come. Fandom quotes Maclane,

The connection from the toy space ranger Buzz Lightyear to the actual cinematic film Buzz (initially voiced by Tim Allen) needed to have connections to our cherished franchise but also stand alone. Likewise, Emperor Zurg needed to be formidable as a villain but keep his trademark traits. That posed challenges to the creative team, according to McLane. Roping in iconic costumes, looks, voices, and more were creative points to be considered. While Chris Evans (Captain America), voices the Star Command recruit, he takes cues from the toy creation, making a more rich and dramatic character. You can see more of the plot’s outline in the official Lightyear trailer.

Lightyear will debut on June 17, 2022. Will you be in the audience for Lightyear? Leave us a comment below.