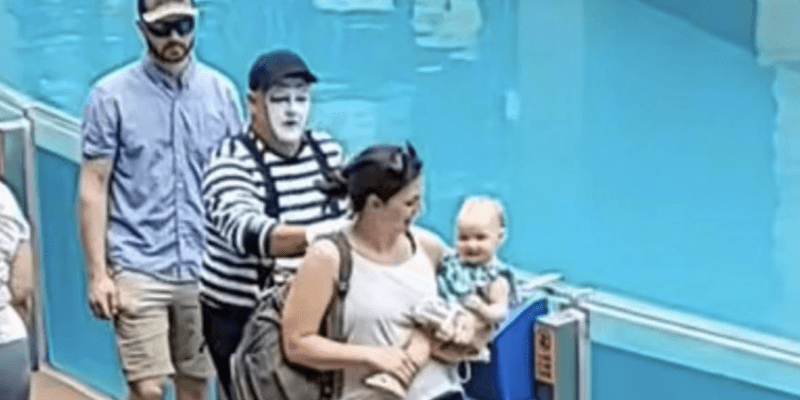 Working as a Cast Member at a Disney Park or a team member at any other theme park property, such as Knott’s Berry Farm, Six Flags, Universal Resorts, or SeaWorld, comes with a unique set of responsibilities.

Occasionally, life is not magical for theme park employees, who sometimes find themselves tasked with handling unruly Guests, breaking up major fights, and dealing with drunken antics. Performers who interact with Guests also face challenges, as they can sometimes cross a line when it comes to good-naturedly poking fun at visitors.

A SeaWorld Orlando mime recently came under fire online for stopping a Guest “in his tracks” to reprimand him for not helping his wife. An article regarding the situation, which has gone viral on TikTok, reads:

…the dad was apparently walking through the Orlando, Florida, theme park when the mime stopped him in his tracks and insisted that he give his wife a hand with her diaper bag. But although the exchange was brief and lighthearted, it’s sparked some interesting conversations in the comments section, where people seem to have a lot of different perspectives on it.

I was on vacation at SeaWorld in Orlando Florida and this happened. #FYP

In the video [above], which was shared by TikToker @fiestascondjnova, a young couple with a baby — with the mother toting both the child and all of the necessary gear for the day — was stopped by the mime, who clearly called out the father in a lighthearted fashion.

Even The Today Show covered the video, which has been viewed millions of times. Their article shared details about the family:

Ernest Palomo recorded the clip last month while visiting the park’s Orlando, Florida, location with his family. It now has nearly 13 million views — and more than 24,000 comments on TikTok.

In the video, Michelle Tzenevrakis is lugging a large backpack and her 13-month-old daughter, Kalliope, while husband Nick trails behind. This doesn’t sit right with the mime. He swoops in, takes the backpack from Michelle, and hands it over to Nick as the crowd erupts into thunderous applause.

However, the interaction sparked intense debate in the TikTok comments section, where many people thought the dad was in the wrong.

One commenter wrote, “We need more of those mimes walking the streets teaching lessons…”

Another chimed in, “He’s so embarrassed,” while another added, “Oh they fought in the minivan after this…”

Multiple people thought the mime highlighted some serious inequality issues between mothers and fathers, with one social media user saying, “[The mime] said SOOO much without saying a single word.”

A female commenter shared, “No but really. They [men] would let us carry the whole world on our backs and watch us struggle.”

Some viewers, however, didn’t take the interaction so seriously, laughing about the situation in the comments. As it turns out the Tzenevrakis family feels the same way. Michelle even posted on Instagram:

A quick trip to Florida last week to visit Nicks grandparents and take in a few sights. We had the best time! And may have gotten TikTok famous

It’s worth noting that 28-year-old Nick himself told The Today Show, “That mime totally caught me off guard. At that moment, I was in a total daze. I was really hungry and my feet were hurting me. I thought it was pretty funny.”

Michelle, a 31-year-old teacher, also set the record straight, telling the morning show, “Nick is the greatest father and I want to make sure that people know that. He does so much for us. He’s just awesome in every way.”

Have you ever had an interaction like this with a theme park performer?

Visit the official SeaWorld Orlando website for more details about Aquatica, Discovery Cove, and all of the experiences the Park has to offer!