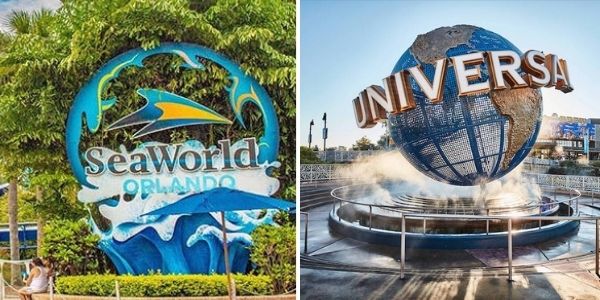 An epic battle was recently waged on social media, with two theme Park giants going at it.

While multiple theme parks occupy the state of Florida, a rivalry has definitely formed within the community of Guests and fans. Firstly, you have the historic Walt Disney World Resort, a Park dedicated to providing high-quality themed entertainment to Guests of all ages.

In Florida you also have Universal Studios Orlando, a theme Park that caters more to adults, offering thrill-seekers plenty of attractions to experience. Here Guests can find tons of their favorite franchises like Transformers, The Simspons, Harry Potter, and much more.

The third big theme Park within the sunshine state involves a lot of water. SeaWorld is a very unique theme Park in that it acts as an amusement Park filled with exciting attractions as well as acting like an aquarium. The Park educates just as much as it entertains.

Of course, all three Parks are allowed to occupy the state of Florida but that doesn’t mean that there isn’t some rivalry between the three. Recently, this rivalry was brought into the public with both Universal Orlando and SeaWorld going at it, burning each other to their hundreds of thousands of Twitter followers.

You’ve arrived. SeaWorld is the #CoasterCaptial of Orlando  And we’re just getting started

📍You’ve arrived. SeaWorld is the #CoasterCaptial of Orlando 🎢

And we’re just getting started 🏝 pic.twitter.com/fyigh7fJOS

*capital Also, we have more.

Also, we have more. 😉https://t.co/8LMvwCwEKk

Spell check missed this one, but you guys need to need to work on your math skills. Most in a single park in Orlando, my friend. No park hopping here.

Spell check missed this one, but you guys need to need to work on your math skills. Most in a single park in Orlando, my friend.

At least there’s another park to hop to.

At least there’s another park to hop to. 🤷‍♀️

Aww Uni, you ALWAYS talk about SeaWorld. You must really care about us  As a token of our friendship, we wanted to send your social team a nice little care package. Enjoy!

This vicious yet still lighthearted exchange shocked fans of both Universal Orlando and SeaWorld, giving the online community of Park-goers something to laugh at together. This is far from the first time Universal has gone to social media with inflammatory tweets as the official Twitter account for the Resort can be pretty bold.

However, both Parks have something unique to offer Guests and both are worth visiting if you happen to be visiting Orlando.

Which side are you on?