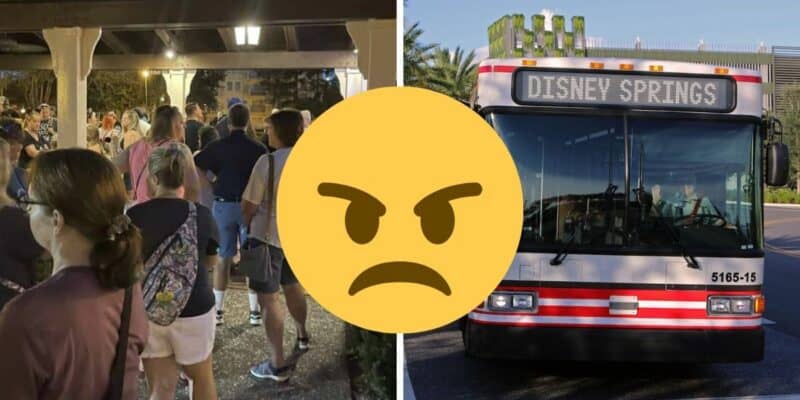 With the number of families visiting the Most Magical Place on Earth, and with Disney World operating at a higher capacity than they were last year, seeing crowds at the theme parks isn’t too surprising; however, we understand how frustrating it can be waiting in lengthy lines, especially first thing in the morning when all Guests want to do is get to the Park they are planning to visit or late at night after the Park closes when all Guests want to do is get back to their preferred destination and rest.

A Disney World Guest took to social media to express their frustrations, saying they pay a lot of money to visit Walt Disney World and they feel the current bus system is not meeting expectations.

“So I have been standing here for about 15-20 minutes but these poor people over here have been standing here for 45 minutes, maybe 50 minutes” the Disney World Guest said. “We’re here at gate 18 at Magic Kingdom waiting to take the bus. This is the second time this has happened to us today with the bus transportation system. Their one bus broke down, this one won’t be able to pick us up until the other bus to guarantee they they’d even show up.”

She continued, “I don’t know what is going on with your bus transportation system but ya’ll need to fix it because this is ridiculous. We pay a lot of money up in here and you guys can’t get us to where we need to go. Come on.”

We have seen long transportation lines as of late, including for the Disney Skyliner and Magic Kingdom bus, which stretched throughout Disney’s Pop Century Resort due to the number of Guests in line.

It is also important to note that Cast Members are working to the best of their ability and want to get Guests to their preferred destination as quickly as possible, but unfortunately, sometimes, technical difficulties can happen, such as a bus breaking down. Please try to be as patient as possible as Disney Cast Members are doing the best that they can.

How long have you waited for a bus at Disney World? Let us know in the comments below.