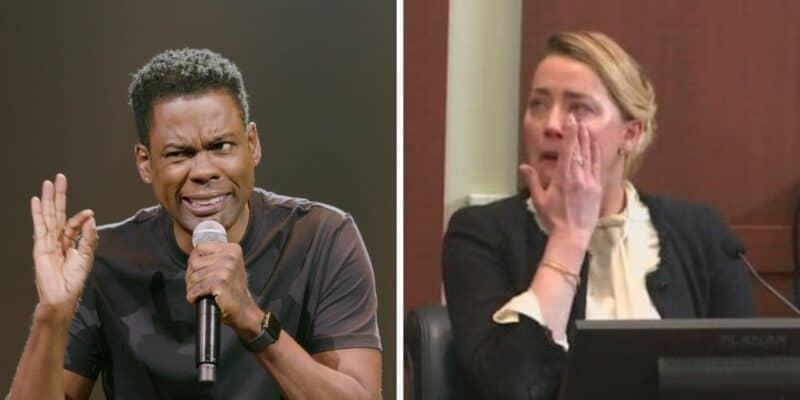 Chris Rock (Spiral, The Longest Yard, Grown Ups 2) has been in the news a lot lately due to the Will Smith Oscars slap.

Will Smith (Fresh Prince of Bel-Air, Aladdin, I Am Legend, King Richard) made headlines back in March after he walked up on stage and slapped comedian Chris Rock across the face after the comedian made a joke about Smith’s wife, Jada Pinkett Smith (Girls Trip, Scream 2) and her new movie G.I. Jane 2.

Chris Rock is now speaking out regarding a different topic — the ongoing Johnny Depp vs Amber Heard trial.

Content Warning: The following contains adult language that may be inappropriate for some readers.

During the ongoing trial, a longtime employee of Johnny Depp’s took the stand, where they discussed a very interesting situation. Starling Jenkins III — an executive chauffer and security guard for Depp — says Amber Heard once told him that defecating in the former couple’s once-shared bed was “a horrible practical joke gone wrong.”

Ever since, this has been an ongoing topic for viewers and fans, some even making TikTok videos making fun of Ms. Heard, and others referring to Amber Heard as Amber Turd.

Chris Rock is now joining in on the joke during a recent comedy performance.

Chris Rock did not hold back when he decided to do a bit on Amber Heard during his recent comedy performance in London.

LADbible reported that Chris Rock brought up Ms. Heard during a segment on his May 12 show. “Believe all women, believe all women… except Amber Heard…,” Chris Rock began. “What the f*** is she on? She sh*t in [Johnny Depp’s] bed! She’s fine but she’s not sh*tting fine.”

He continued, “She sh*t in his bed. Once you sh*t in someone’s bed you [are] just guilty of everything. She sh*t in his bed. What the f*** is going on there? Wow. And they had a relationship after that. It must be amazing p*ssy… I’ve been with some crazy bitches but goddammit.”

The Depp vs Heard trial will continue on Monday in Fairfax, Virginia.

What do you think of the Depp vs Heard trial thus far? Let us know in the comments below.