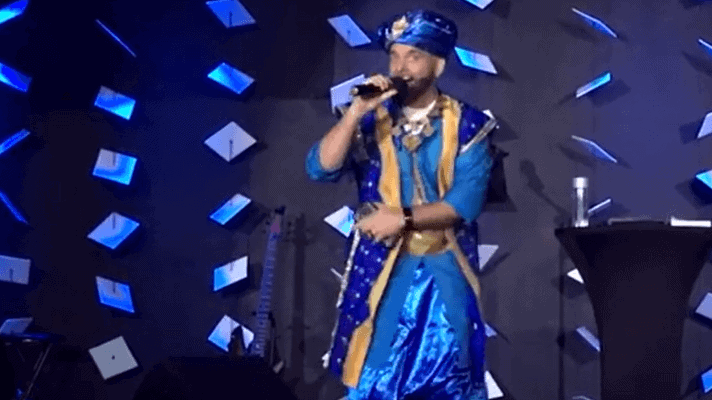 If you thought you were the biggest fan of Disney’s “Aladdin,” think again. We loved the new version of the classic animated Disney film, but it seems like some fans are taking “Aladdin” to a whole new world. One pastor recently sang a Christian-style cover of “Prince Ali” while dressed up as Will Smith’s Genie at church, and the video is priceless.

Word Up Ministries, a local church ministry in Lakeland, Florida, recently shared a video of Pastor Frankie Floyd singing his rendition of “Prince Ali” from the 2019 version of Disney’s “Aladdin.” Floyd dressed in the style of Will Smith’s Genie character and sang the song in a similar way that Smith does in the film, but with a religious twist. (He sings “Make way for Christ our king” instead of “Make way for Prince Ali,” for example.)

The song was performed as part of Word Up Ministries’ At the Movies sermon series, in which the ministry is exploring worship through modern films. The “Prince Ali” performance kicked off the series, which aims to connect Hollywood films with church lessons. Word Up shared on their Facebook page that they plan to include not only “Aladdin” but also “Captain America” and “Bird Box” in this series, among other well-known modern films.

Whether or not you agree with this church’s ideology, it’s pretty clear how much thought went into this cover of a Disney song — which they are titling “Christ Our King (Prince Ali Christian Remix).” Take a look at the full video below, which was first shared to the ministry’s Facebook page:

Christ Our King (Prince Ali Christian Remix)Pastor Frankie Floyd from our At the Movies Series Opener.[Note: we do not own rights to the original music.]

Posted by Word Up Ministries on Thursday, September 12, 2019

You can make up your own mind about this church’s take on the popular Disney tune, but one thing’s for sure: it’s definitely creative.

What do you think of this Florida pastor’s cover of “Prince Ali” from Disney’s 2019 version of “Aladdin”? Let us know in the comments!