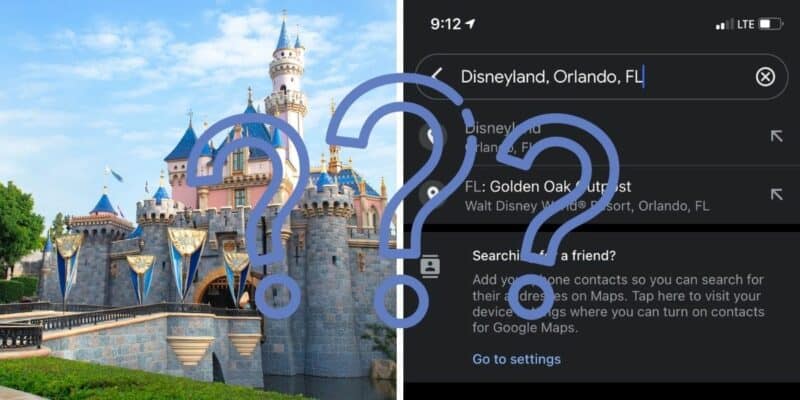 When searching directions to Disneyland, Google Maps hilariously showed the first-ever Disney Park located in Orlando, Florida — which as many of you know, is not correct. Walt Disney World is the theme park located in Florida while Disneyland is located in California.

You can see this mistake in the screenshot below.

Related: According to Google, Disney’s Tallest Ride is at a Competitors Theme Park

We got a kick out of this as one of the biggest pet peeves from Disney fans is when people say Disneyland is located in Florida, when we all know it is actually located in California — but we never thought Google Maps would be one of these people!

Disneyland, located in California, is home to two theme parks — Disneyland Park and Disney California Adventure — as well as the shopping and dining district, Downtown Disney. Not long ago, Disney unveiled plans for an expansion of the Disneyland Resort! The project, which is called DisneylandForward, includes theme park, retail, and parking expansions of the Anaheim resort.

We do want to note that the DisneylandForward plans describe the theme park expansion as exactly that — a theme park expansion — and not a “third gate” park as many first interpreted it. Disneyland Resort is preparing to work with the City of Anaheim to make these dream plans come true. And keep in mind that plans can change — so, as soon as more details regarding what exactly is coming to the Disneyland Resort — be it more attractions, retail, dining, hotels, parking, or even another park — we will be sure to update our website.

What do you think of Google Maps making this mistake? Does it annoy you when people think Disneyland is in Florida? Let us know in the comments below.