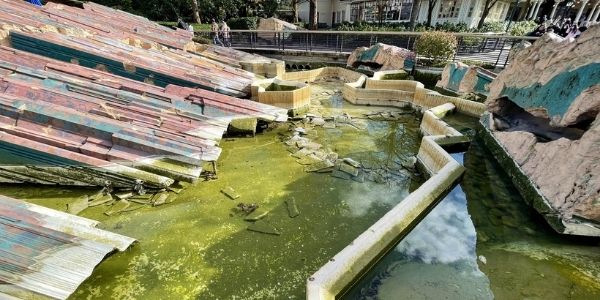 While all of the Disney Parks and Resorts are filled with magic and pixie dust, sometimes that pixie dust can run out.

Disney is always hard at work improving and renovating the rides, attractions, and experiences within its Parks as a way to keep things fresh for Guests. Unfortunately, this process can get drawn out and messy, leaving parts of the Park in desperate need of a “spring cleaning”. We recently got a look at a few projects going on at Disneyland Paris which look a trad unsightly right now thanks to tweets from DLP Report (@DLPReport). See the pictures below:

The Discoveryland entrance basins are being emptied, hopefully for a good clean

🔧 The Discoveryland entrance basins are being emptied, hopefully for a good clean 😬 pic.twitter.com/zJaOdx6QS8

Work is also being done on Crush’s Coaster, an attraction themed around the Finding Nemo franchise. See some construction photos below again from DLP Report:

Checking on “progress” on the Crush’s Coaster queue remodel:

Of course, Cast Members do their best to keep things clean, but at times more help may be needed!

We are super excited as Disneyland Paris is nearing its 30th anniversary. Now, with Walt Disney Studios Park and Disney Village joining Disneyland Park, and with new, exciting upcoming attractions like Avengers Campus and Arendelle: World of Frozen coming in the near future, this Disney Park is primed for an exciting birthday celebration. We are hopeful both of these projects are completed in the near future, making the overall Disneyland Paris experience that much more magical for Guests visiting during the 30th Anniversary.

Have you been able to visit Disneyland Paris? Let us know in the comments below.