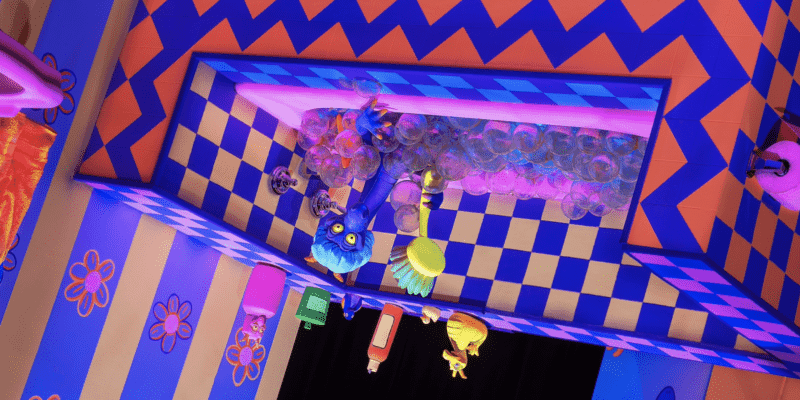 When you are visiting any of the Disney Parks and Resorts, you will always notice something new or something being worked on. Whether it’s an annual refurbishment like with Splash Mountain or a complete overhaul like what’s happening over at EPCOT, there will always be something new to look forward to as a Disney Guest.

At EPCOT in the Walt Disney World Resort, fans are super excited for all of the new experiences coming, especially with the new Guardians of the Galaxy-themed ride coming to the Park which replaced Ellen’s Energy Adventure. Guests can also have a great time traveling “across the world” thanks to the incredible World Showcase at the Park. But perhaps the most infamous attraction in the whole Park can be found at the Imagination Pavillion.

One Guest shared a photo of the Figment animatronic and claimed the overall ride experience was terrible. See the tweet from Nathan (@BroncoTruck) below:

Figment has a replacement phone. It is barely attached and wobbled all over the place. And the ride keeps stopping at random places. This is terrible lol pic.twitter.com/OJyVSf3NRB

A few users commented their thoughts on the current state of the attraction. User Noah!! (@noahgabriel06) said:

just thinking about the current state of this ride makes me so sad.

just thinking about the current state of this ride makes me so sad.

It was horrible a couple of weeks ago. No lights, no train sound only the fan blowing. Timing was way off

It was horrible a couple of weeks ago. No lights, no train sound only the fan blowing. Timing was way off

Disney has not made an official statement regarding the attraction or any possible updates in the future, so we can only hope these issues are fixed sooner rather than later. While often forgotten, Journey Into Imagination With Figment is still a beloved ride by many as well as the character of Figment himself.  We recently have seen the mega-success Disney has had with the FIgment-inspired popcorn buckets, with lines reaching multiple hours at a time and people re-selling the buckets on eBay for hundreds of dollars. If anything, Figment is still an incredibly popular character.

More on Journey Into Imagination With Figment

How do you feel about this attraction in EPCOT? Let us know in the comments below.