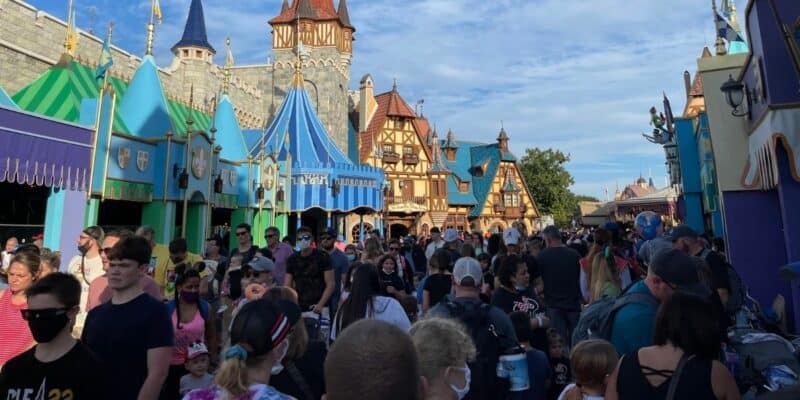 Recently, a discussion regarding Disney was brought up with one Guest suggesting a very interesting method to cut through crowds.

There is no denying the Disney Parks are insanely busy right now, possibly the busiest they’ve ever been. With thousands of Guests visiting for Spring Break as well as the approaching summer months, it looks like the “off-season” may no longer be a thing. While the Disney Parks continue to add new and exciting attractions, sometimes sit doesn’t seem like enough to satisfy the huge crowds that visit every day. This issue was brought up online recently with one Disney fan making a very drastic situation.

A post on Reddit highlighted this issue, with one Guest actually suggesting Disney should cut capacity by 75% in order for the 25% still coming in to have an amazing and uninterrupted visit. Of course, this would come with an expanded cost but the idea is interesting, to say the least.

Lots of users agreed with this suggestion, saying they would 100% be willing. One user said that they would definitely be willing to, but it would be more a matter of if they could actually afford the exorbitant ticket prices. Another user said that they don’t mind crowds but waiting multiple hours to ride an attraction is not fun. Another user said they just wish we could go back to the deals of the early 90s and 2000s. Another user brought up how Disney is almost “unattainable” for lower to middle-class families already, so they wouldn’t want the price of tickets to go up this much as it would block out a big portion of would-be Guests.

One solution to this issue was brought up in the discussion, with users suggesting trying Disney’s own VIP Tours. These are special tours Guests can book which allows them to experience any ride or attraction without interruption. More on VIP Tours below:

Our World is Your Kingdom

Maximize your fun at the parks by taking one of our fun-filled and efficient guided tours.

There is no denying a Disney vacation is already expensive with the price seemingly increasing every day. In the past few months, we have seen food and merchandise get more expensive as well as certain types of tickets and special events. However, there are ways that Guests can save money while visiting the Disney Parks. One example of this is Disney recently revealing that Guests with a Disney+ membership could get a discount on their hotel room.

Another point of contention in the discussion was Disney’s Genie+ system. Disney Genie+ and Lightning Lane were released last year to much criticism and frustration, leaving many Guests feeling confused by the service. In theory, this paid service should enhance Guests’ experience at the Parks, but in practice, it seemed to just be an expensive itinerary planner. These paid services allow Guests to skip lines for a price, meaning Disney now has a financial incentive to have long lines. At Disney World, for $15.00 per day per Guest, you can skip the long standby queue by making a Lightning Lane reservation (new FastPass) and returning at that time. As of now, for many Guests, the jury is still out on the actual usefulness and efficiency of this service.

In the coming months, Guests can anticipate several new experiences in the Parks, most notable being the new Guardians of the Galaxy as well as the complete transformation of EPCOT. In the Magic Kingdom, Guests are also eagerly awaiting the release of the new TRON roller coaster in Tomorrowland. For those wanting to plan a trip soon, hopefully, these prices won’t hurt you too much!

Do you agree or disagree with the suggestion brought up in the post?