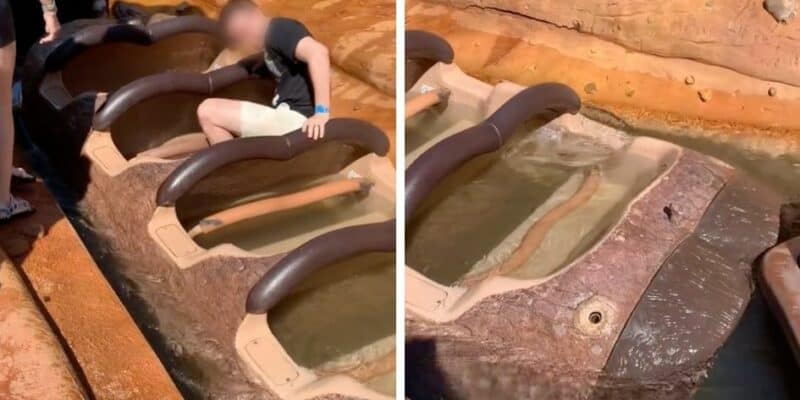 It seems that some Guests are going down with their ship on a certain Disney World attraction, but it is not Pirates of the Caribbean.

When Guests visit Walt Disney World, many do not intend to see the attraction they are riding break down. Although we have seen ride vehicles need to be shut down and Guests evacuated, we rarely do see a Guest sinking along with the ride vehicle. It seems at Splash Mountain at Magic Kingdom, however, Guests are ending up quite wet, but it is not from the splash.

There may not be a more iconic or beloved attraction in all of Walt Disney World than Splash Mountian. The classic log-flume ride takes Guests on a wild trip, following the story of Br’er Rabbit all the way over a 50-foot drop. The ride has entertained Guests for decades and become a true icon of Disney Parks. Unfortunately, it seems things did not go to plan as a few Guests reported that one of the ride vehicles sunk into the water.

We had previously reported claims that Guests were making, stating that their log was fully submerging in the attraction’s waters. In our previous reports, we noted that the Guests in question were given clothing vouchers to fully replace what they were wearing, as they were soaking wet from the incident. Now, we have a visual representation of what happens when these boats sink, as it seems the issue is ongoing.

Danglin90 (@danglin90) posted a video just a few hours ago of a singing log in Splash Mountain! As you can see in the video, the ride vehicles are nearly fully submerged underwater. It seems that this issue began without any Cast Members in sight, as the Guests in the log were helping each other out. One Guest was not able to get out of the boat due to the seat restraint but eventually made it out. We can see that this issue was caused by the boat behind overlapping the back of the boat in front, which pulled the ride vehicle down, toward the water.

Interestingly enough, one commenter noted that they saw Disney Cast Members draining another boat in that same area a few days ago, so we can see that this area is clearly an issue when multiple boats bunch up. Luckily, it seems all of the Guests may have been a little wet, but they all do not seem to have sustained any injury.

For those who do not know, Disney is ridding multiple Splash Mountain attractions to erase the Song of the South presence in their parks, which has racial undertones to it. Instead, the ride will be rethemed to Princess and the Frog, which will match the ride quite perfectly.

Disney has not yet announced when either Disney World or Disneyland will be seeing the newly updated Princess and the Frog attraction, but we do know that it is being worked on by Imagineers at the moment in terms of the planning and story of the attraction. As there is a lot to change, it makes sense that Disney is doing all that they can behind the scenes so that the attraction’s big closure will hopefully not last too long.

As described by Disney:

Have you ever seen a Splash Mountain log sink? Let us know in the comments below!