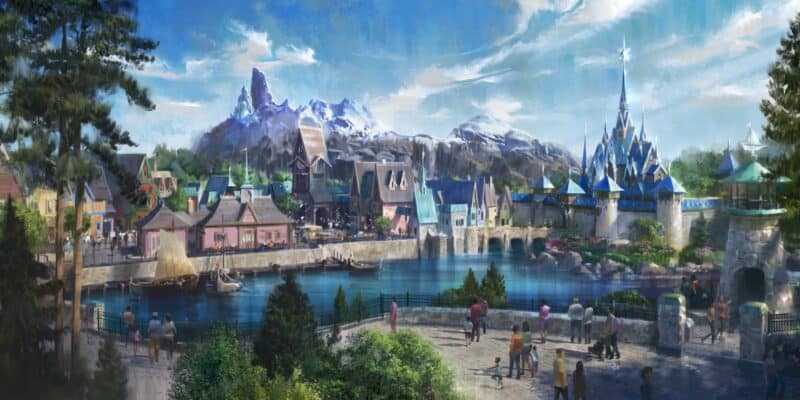 We recently got some brand-new looks at a super exciting expansion coming to an international Disney Park soon.

Internationally, many Guests are starting to get excited about the upcoming Avengers Campus expansion at Disneyland Paris. The first version of this Marvel-centric land opened in Disneyland’s California Adventure last year and featured a whole host of Marvel-themed attractions and entertainment. This isn’t the only expansion coming to the Park, however, with a Frozen-themed land also in the works with Disney giving us a sneak peek at what to expect on the official Disneyland Paris News website.

As Guests approach the heart of the Park, Elsa’s Ice Castle will welcome them from afar. This magnificent structure will stand atop of a 131-foot snow-covered mountain, right next to a 3-hectare lake. The Kingdom of Arendelle will open its gates to the public “for the first time in forever”, and on this occasion, many experiences will await, including a new attraction that will take Guests on a journey alongside iconic Characters from the world of Frozen. The village – with its film-inspired architectural style – will be home to a shop, and restaurant serving dishes with a Nordic touch. In addition, Guests will get to meet their favourite Characters during a royal Meet & Greet they will remember forever.

We are so excited about this expansion, as well as all of the other projects being worked on in Disneyland Paris!

Most recently, we discussed all of the new offerings that Guests can expect to see when they visit. You can click here to learn more about what is being offered. In short, there is new packaging on everything, from water bottles to sandwich boxes, Minnie Mouse is looking as chic as ever in her new pantsuit, the After Glow show illuminates Sleeping Beauty Castle with an amazing drone experience, The all-new Dream… and Shine Brighter has also debuted, and so much more.

Are you excited about this new expansion?