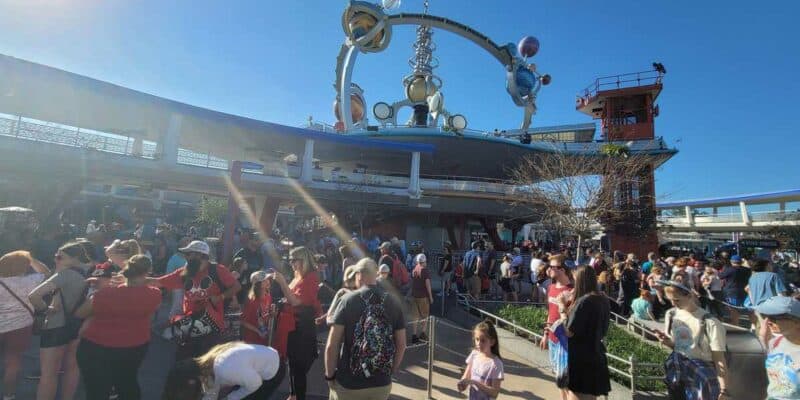 Related: How to Avoid Crowds at EPCOT on Your Next WDW Trip

In the above photos, you can see that the stand by line for rides such as Space Mountain, the Tomorrowland Speedway, Astro Orbiter, and the Tomorrowland Transit Authority PeopleMover are extending outside of the normal queue area and are wrapping through the land.

This isn’t too surprising as we have been reporting on available Disney Park Pass availability lately, which is slim to none.

In case you aren’t familiar with the Disney Park Pass system, when Disney World reopened to Guests in July 2020, the Orlando Resort implemented a new reservation system that requires those who wish to visit a Walt Disney World theme park — Magic Kingdom, Disney’s Hollywood Studios, EPCOT, or Disney’s Animal Kingdom — to have both a valid ticket and a reservation for the park they wish to visit on that day.

This reservation system is called the Disney Park Pass system.

As we approach the spring and summer time, we expect to see the Park Pass availability continue to sell out so if you are planning on visiting Walt Disney World and its four theme parks — Magic Kingdom, EPCOT, Disney’s Hollywood Studios, and Disney’s Animal Kingdom — be sure to secure your Park Passes as soon as possible.