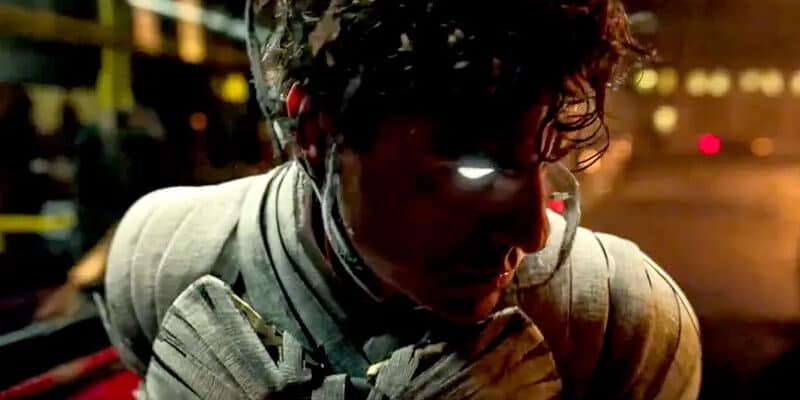 Oscar Isaac’s Moon Knight is considered to have major inspiration from Fight Club (1999) and Indiana Jones.

Marvel released a new look at the highly anticipated MCU series and you can watch the 90-second clip below:

Related: Popular Avenger Reportedly Returning to the MCU In A Big Way

The show will explore the identities of Steven Grant/Marc Spector/Moon Knight as the hero struggles with Dissociative Identity Disorder. Mohamed Diab explains that fans will get to know Steven Grant before seeing who Marc Spector is as both personalities are very different. For example, Steven is a gift shop clerk while Marc is a mercenary.

Kevin Feige praises Moon Knight as a “spectacular character” who has an “incredibly unique visual look.” This isn’t the first time Feige has shared his love for this upcoming series as he claims it will push the boundaries with the amount of violence shown in the MCU.

Oscar Isaac shares he believes the show is a “legitimate character study” and he shared that the team took the “mental health aspect very seriously” as it is a huge component of Moon Knight’s character. Moon Knight isn’t a well-known superhero from Marvel Comics and it’s important for fans to understand the hero’s mental health as the actor says the show will be “very unpredictable” at times.

May Callaway (Layla) shared how she thought the show was “Fight Club meets Indiana Jones” which makes total sense. Moon Knight’s mental health will cause him not to know what is happening at certain moments which is similar to Fight Club. With Egypt and Egyptian Mythology playing a large role in the series, it definitely gives off an Indiana Jones vibes. After seeing the interior of a pyramid, there is definitely some inspiration from Raider of the Lost Ark (1981).

Ethan Hawke’s Arthur Harrow looks like he is trying to find a certain artifact from ancient Egypt as another shot of the character shows him searching in the desert. Instead of being a mad scientist like in the comics, it seems that Harrow will have some magical objects like the orb that is levitating in the air in the featurette.

The supernatural side of the series is apparent as Moon Knight travels with Khonshu through a weird location full of shadow and rays of light. As Khonshu will be the God who grants Moon Knight his powers, it will be interesting to see how important the Moon God will be in the limited series.

In case you don’t know much about Moon Knight, don’t worry because here’s a short description of the complex hero from Marvel:

Moon Knight is very close to debuting on Disney+ as it will release on March 30. Only a few more weeks before fans get to see Marvel’s newest superhero join the Marvel Cinematic Universe!

Are you excited for Moon Knight? Do you plan to watch the upcoming series when it releases? Let us know what you think in the comments section below!