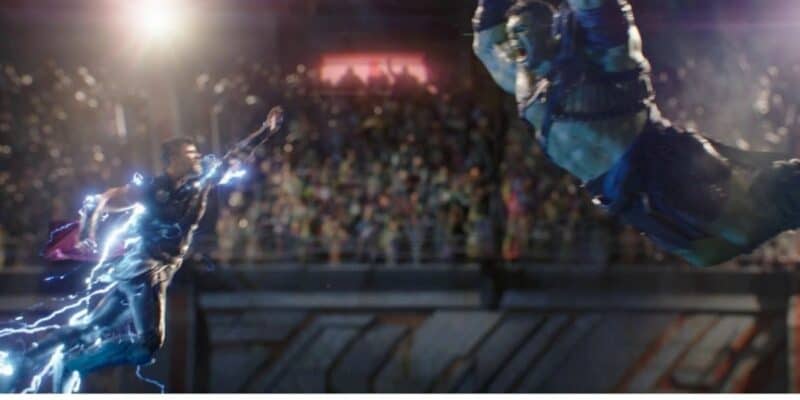 Thor (Chris Hemsworth) claims that he is the “Strongest Avenger,” but Tony Stark/Iron Man (Robert Downey Jr.) clearly thinks that the title belongs to Bruce Banner/Hulk (Mark Ruffalo). Although in fact, the strongest Avenger is Wanda Maximoff/Scarlet Witch (Elizabeth Olsen). Now, Marvel has announced they will fight again this April, and “Brawl to End Them All” in Hulk Vs. Thor: Banner of War by Donny Cates, Martin Coccolo, and Gary Frank.

Thor and Hulk have gone toe-to-toe twice already in the Marvel Cinematic Universe with no clear answer as to who is more powerful. First, in The Avengers (2012), directed by Joss Whedon. Thor attempted to stop a rampaged Hulk about the helicarrier. However, the fight ended in a drawl when Hulk jumped off the helicarrier to take down a fighter jet.

Thor: Ragnarok (2019) director Taika Waititi pitted Thor and Hulk together for the second time in the Grandmaster’s (Jeff Goldblum) arena on Sakaar. Again, it ended without a definitive conclusion about whether Hulk or Thor was stronger when Thor passed out after summoning lightning for the first time without his hammer, Mjolnir.

Marvel fans have debated forever whether Hulk or Thor is stronger. Their rivalry in comics began in Journey Into Mystery #112 (1965) by Stan Lee. Their first battle was started by a group of kids who asked Thor was strong than the Incredible Hulk. Later fights would be much more severe and were caused by different issues. In Marvel Comics, it’s a rule that neither Thor nor Hulk ever truly gets a leg up on the other for long.

Marvel has gotten fans excited for the rematch by releasing a trailer for Hulk VS. Thor: Banner of Wars Alpha #1 – though they are still waiting on the trailer for Thor 4.

But the Banner of War comic book event could change all of that. To celebrate both Thor and Hulk’s 60th Anniversary, they will crossover this April for an epic battle. The official description of this event from Marvel Comics reads:

“Celebrating the two heroes’ 60th anniversaries, this five-part crossover will kick off in HULK VS. THOR: BANNER OF WAR ALPHA #1 before exploding in the pages of both Hulk and Thor’s hit solo titles throughout May and June. Tackling ongoing mysteries from both series and featuring artwork by rising star Martin Coccolo and covers by legendary artist Gary Frank, the story promises to deliver Thor and Hulk’s most glorious battle yet and the showdown will have a shocking impact on both characters’ futures.

In the aftermath of the opening arc of HULK and the “God of Hammers” arc currently unfolding in THOR, both Bruce Banner and Thor Odinson have both undergone massive changes, but one thing remains constant — their heated rivalry! When mysterious circumstances bring them into conflict once more, will the God of Thunder be able to triumph against a Bruce Banner who can now control his rage?”

Donny Cates also teased that this new battle will be different from any brawl Thor and Hulk have had before. He told Marvel:

“Well, I was a little surprised that Marvel approached me to write this, if I’m being honest. I’m mostly known for writing very small, very quiet, intimate comics, so I had to — ha!! Sorry. Couldn’t keep that up. Yeah, this is gonna be bonkers as hell, guys. We’re going to break EVERYTHING! Happy birthday, Hulk and Thor! Hope you enjoy MASSIVE AMOUNTS OF VIOLENCE!”

MCU fans are not expected to see a Hulk VS Thor fight in Marvel’s Phase Four. Thor is returning in Thor: Love and Thunder (July 8, 2022) with the cast of Guardians of the Galaxy including Chris Pratt as Peter Quill/Star-Lord. But the Thor: Ragnarok follow-up will not have an appearance by Hulk. Natalie Portman is returning as Jane Foster/Mighty Thor, Tessa Thompson will play Valkyrie/The King of New Asgard and they will battle Christian Bale’s Gorr the God Butcher.

Meanwhile, Bruce Banner will be busy introducing his cousin, Jennifer Walters/She-Hulk (Tatiana Maslany), on Disney+ with the premiere later this year of the She-Hulk series. There are also rumors he could cameo in Deadpool 3 along with his Adam Project co-star Ryan Reynolds (Wade Wilson/Deadpool).

Let us know in the comments who you think will win this Hulk VS. Thor rematch?