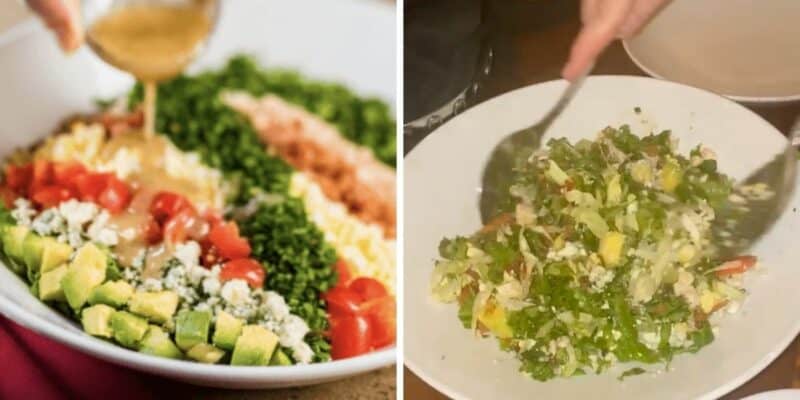 We have been recently reporting on how Disney Guests are complaining about the quality of food at Disney restaurants. This comes after Walt Disney Company CFO Christine McCarthy indicated that in order to start cutting costs, Disney plans to begin “reducing portions” at Disney Parks restaurants as it “would be good for Guests’ waistlines.”

Now, another Disney World Guest has not only saw a price increase at one restaurant, but noticed a significant reduction in the portion size.

The Hollywood Brown Derby is located at Disney’s Hollywood Studios and is probably best known for its iconic Cobb Salad. As seen in the picture above, the Cobb Salad comes with a heaving serving of turkey, bacon, egg, tomatoes, blue cheese, avocado, and the classic dressing.

In the past, the salad used to be so big that two people could easily share the food item; however, it seems those plans for Disney to reduce portion sizes are already hitting many restaurants as one Disney World Guest noticed how much smaller the Cobb Salad was on their recent visit.

Shaina W. sent the following video to Inside the Magic and explained how disappointed she was with the portion size, especially because of how much she loves visiting The Hollywood Brown Derby.

But the portion size isn’t the only thing she noticed. When looking at the menu, Shaina noticed that the price of the Famous Cobb Salad had increased since the last time she visited.