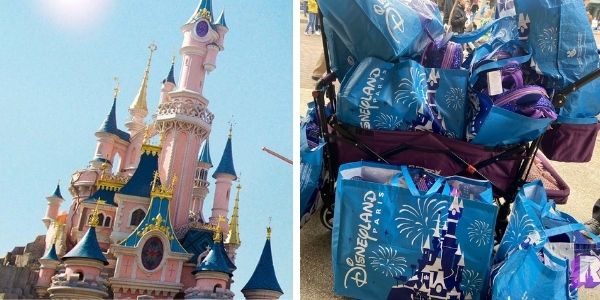 Anytime Disney has a special event or holiday celebration, Guests can expect to find some cool and unique limited-edition merchandise. In the past, we have seen this with pins, buttons, and even popcorn buckets. However, sometimes Guests will take advantage of limited-time products, hoarding them for resell later.

Currently, at Disneyland Paris, the Resort is celebrating its 30 anniversary. During the anniversary, Guests can experience multiple jaw-dropping shows such as Disney D-Light, a fantastic nighttime show that uses drone technology.

The Loungefly bag is a bag that Disney Guests have gone crazy for, as at every event there is always an exclusive design. This is no different at Disneyland Paris as there is a very magical-looking purple bag. However, some Guests are using this chance as a way to make money, hoarding these bags and selling them later. As shown in a tweet from DLP Report (@DLPReport), some Guests are taking this opportunity and running with it:

As expected. There’s probably 50 bags in there.

As expected. There’s probably 50 bags in there. pic.twitter.com/k4wuP1sjbE

Interestingly, the prices for these bags has actually been increased in the Parks, either due to an error or because of how well they are selling:

The #DisneylandParis30 Loungefly bag has been marked up to €100 from the original €80 sticker price underneath. These markups have been the trend for most of the anniversary collection.

The #DisneylandParis30 Loungefly bag has been marked up to €100 from the original €80 sticker price underneath. These markups have been the trend for most of the anniversary collection. pic.twitter.com/Dxyum0vK3M

As you can see, these bags are already making their way to eBay:

While Disney usually enforces a certain number of bags or items per Guest, sometimes Guests can get around this by using multiple people to buy them. Earlier this year the Figment Popcorn Buckets at EPCOT were a smash-hit, with Guests waiting multiple hours for the chance to buy one.

There is a lot to look forward to at the Disneyland Paris Resort this year, not only with the 30th-anniversary celebrations underway but also with an exciting expansion coming. Disneyland Paris is getting its own version of Avengers Campus!. Here, Guests can see a whole cast of characters and movie franchises represented in the photo like Spider-Man, Ant-Man, Iron Man, Captain Marvel, Black Panther, Thor and Doctor Strange and I’m sure there will be lots more when Avengers Camus officially opens. There will also be a new Iron Man coaster The ride will replace Disneyland Paris’ version of Rock ‘n’ Roller Coaster.