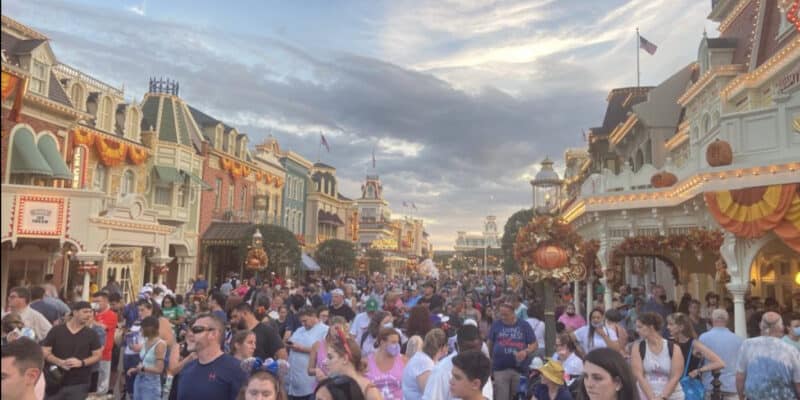 If you are visiting Walt Disney World Resort this week, you better get ready to experience some heavy crowds.

Since Magic Kingdom, EPCOT, Disney’s Animal Kingdom, and Disney’s Hollywood Studios all reopened after the pandemic we have seen crowds slowly begin to increase. Although capacity is not back to what the pre-pandemic levels originally were, the crowds are bustling, and we now know Disney will never return to those levels, so this may be the new normal. Disney is always going to be busy no matter when you visit throughout the year, however, there are certain times of the year that are much worse than others.

Often, we see holidays be a very popular time for Guests to visit Disney, and from late February through to early April, many different school districts undergo their spring break, which is a perfect time for many families to fly to Orlando as the kids are out of school. This week in particular has been one of the busiest of the season, with Park Passes gone for all Guests throughout the week. This means that if you do not have a Disney Park Pass for this week, you will not be able to get into the Park.

We recently wrote on the insane lines that are growing for PhotoPass due to the influx of Guests, and on social media, we can see that no matter where Guests are going to escape the crowds, they cannot. Because of this, we have also seen lines for attractions like Space Mountain at Magic Kingdom grow incredibly long, almost passing the exit of Tomorrowland. As many Guests want to avoid waiting in line for hours, Disney Genie+ has been a popular purchase so that Guests can use Lightning Lane.

Since Guests can only utilize one Lightning Lane pass at a time, the race to get a new pass after you ride an attraction at an earlier time is essential to being able to continue using the service. But what happens when Lightning Lane sells out?

Thanks to WDW Stats (@WdwStats) we have seen that Lightning Lane options are disappearing faster than Guests can book them!

All the Lightning Lane passes for Alien Swirling Saucers have been given away. #HollywoodStudios #WDW #WaltDisneyWorld #DisneyWorld

All the Lightning Lane passes for Alien Swirling Saucers have been given away. #HollywoodStudios #WDW #WaltDisneyWorld #DisneyWorld

Toy Story Mania is also sold out for the day.

All the Lightning Lane passes for Toy Story Mania! have been given away. #HollywoodStudios #WDW #WaltDisneyWorld #DisneyWorld

All the Lightning Lane passes for Toy Story Mania! have been given away. #HollywoodStudios #WDW #WaltDisneyWorld #DisneyWorld

Other attractions like Na’vi River Journey, Mickey & Minnie’s Runaway Railway, Tower of Terror, Rock ‘n’ Roller Coaster Starring Aerosmith, Millennium Falcon: Smugglers Run, Kilimanjaro Safaris, Frozen Ever After, Slinky Dog Dash, Test Track, Rise of the Resistance, and more are all no longer available for Guests to obtain, even with over half the Park day left.

From this, we can clearly tell that the amount of Guests not only at Disney World but using Disney Genie+ is huge. If you show up to the Parks late with a desire to use Disney Genie+ this week, we would advise against it, as you will likely spend the $15.00 per person to find little to no availability for the attractions you desire.

What do you think of Disney Genie+? Let us know in the comments below.