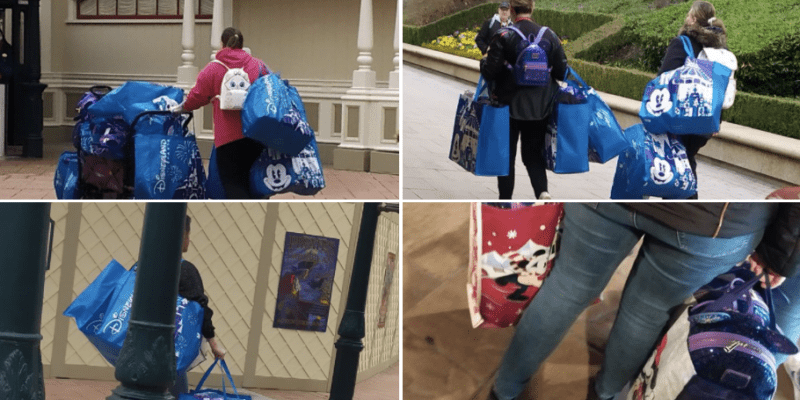 Lately, at Walt Disney World Resort as well as Disneyland Resort, we have seen Disney take an active stance against resellers when it comes to their merchandise. Whenever Disney drops a new line of merchandise or a limited-time product, we tend to see some Guests leave with as many pieces of merchandise that they can carry.

They then go to sell those products online for a heavy markup.  It is against the rules at Disney, especially to use an Annual Pass discount to save money, to only then resell it for higher, and if caught can end in a ban from Walt Disney World property for life. Buying merchandise from Disney directly ties a product to the memory you may have from that day, which can end up becoming priceless. One thing about a lot of merchandise at Disney is that it can go fast, and it is extremely coveted. For example, when the 50th anniversary began at Walt Disney World, we saw multiple fights break out at Magic Kingdom’s Emporium over a Starbucks tumbler. The altercations became very physical, all because the bottle had sold out, and Guests were fighting for the last one available.

Disney has done what they can to try and curb resellers by putting a limit on items that they can buy as only two per person, but some bring their kids or friends with them while purchasing items, and are then able to drive up their count. The most recent debacle in the reseller market at Disney was the Figment popcorn buckets at EPCOT for the Festival of the Arts. Guests were lining up 7 hours in advance to collect their buckets and later that day, we found multiple on eBay selling for over $200.00. We have also seen lightsabers on the Star Wars: Galactic Starcruiser sell for $1500.00.

Yesterday, we reported that Disneyland Paris was experiencing hoards of resellers taking over the 30th anniversary merchandise and more. Of course, purchasing a lot of items is allowed for all Guests, but when this causes a product to sell out due to one person, it leaves nothing for Guests on vacation to take home as souvenirs. We have seen insanely long lines for 30th merchandise as well, so it would be very tough to have waited so long only to see that the product you wanted is gone, and likely in a wagon that is being pulled around you.

As we shared yesterday, Disneyland Paris has a five per person rule. Djo Is Ready For the Riiiide (@wonderdojo) said:

It’s 5/person, but suddenly people come in groups/with their children and line up again (which lasts 1h30 lol)

As we have seen at Walt Disney World, Guests at Disneyland Paris are using children to up the amount of merchandise they can purchase. When our Inside the Magic readers took a look at our reporting yesterday, many were saddened and unfortunately not shocked to see this reseller issue not yet be resolved. One reader named Kari said, “I hope they get stuck with all of it”. There is a chance that the resellers will not be able to see their items, in which case they would be out of money or forced to return the items if they want their money back.

Frank thinks that Guests who leave with bags like this should be banned from the Parks. Frank commented “BAN THEM!” on our Facebook page when we shared our original article. We have seen Disney take action like this in the past, but they would have to prove that the Guests are reselling the items, which can become tricky. Sue seems to not bother with anger, they stated, “No one stops them so who cares !!!”

Clint thinks they should lower the amount of merchandise to 3 per person instead of 5, but Joseph replied “limit at WDW is 2 per person per SKU – so that means they can buy two of each size of an item…and they can bring their children or buddies and they get to do the same…it’s a mess!”

As readers continued to comment, we can see that Guests are not pleased with the reselling market being such a tough one to squander.

What are your thoughts on Disney resellers?