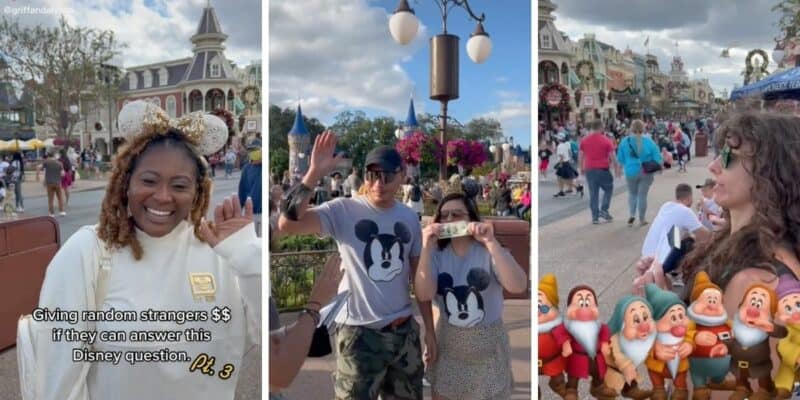 Are you a fan of the Disney Parks? Do you live and breathe Disney? Can you answer questions like “how many sisters does Ariel have?” or “Where does Winnie the Pooh live?”.

Well, if so, you may be in luck as some Guests are going around Walt Disney World asking random strangers Disney trivia questions in exchange for real cash prizes!

Related: These 7 Must-Have Books will Make You a Disney Trivia Expert

A group of Guests are going to the Walt Disney World Parks, asking complete strangers random trivia questions. If they correctly answer, they will receive a cash prize!

In a video posted to TikTok, a group of Disney fans went around Magic Kingdom asking strangers trivia questions. For example, they held up a photo of a Disney character and ask “who is this character?” The Guests in the video correctly answered the question and received $100!

The video is captioned “Giving random strangers $$ if they can answer this Disney question pt 4”.

When looking at the rest of the TikTok users profile, we came across the other parts of these random trivia videos, including this one where they asked her to name all seven dwarfs from Snow White and the Seven Dwarfs (1937). (Spoiler alert: She named all seven dwarfs and received $100 for doing so!)

Thanks for playing, @Madison Riggins ! Could you guess them all?? Full video on YouTube. #disneycreator #disneyworld #trivia #fypage

We love seeing Disney magic like this spread throughout the Parks!

Have you ever ran into these Disney Guests giving money out to strangers for answering trivia? Let us know in the comments below.