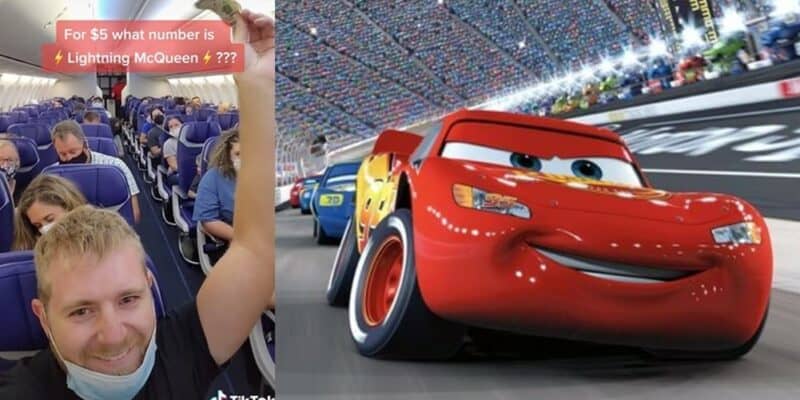 If you’re a fan of the Disney Pixar Cars film, chances are you’ve also seen Cars 2 and Cars 3. The movies are packed with excitement with excellent characters including the star of all three films, Lightning McQueen. The red race car is known for his high-speed action around the track and famous “Ka-chow!” catchphrase. Well, if you thought you were a big fan of Lightning McQueen… you’re going to want to check this out. A HUGE Lightning McQueen fan has even gone as far as dishing out money for Lightning McQueen airplane trivia.

@ninefivegarage is not your average Lightning McQueen fan, and the evidence is clear in his TikTok account where he shares his love for all things Lightning McQueen. In fact, he is a huge enough fan of Lightning McQueen, that he has a car that resembles the popular Disney character. We’re not talking about just “kind of” resembles Lightning McQueen… but it very well could be McQueen! Check out one of his videos below with the car looking amazing:

What better way to share your love for all things Lightning McQueen than with a bunch of random strangers on a plane! That’s right, @ninefivegarage was on what looks like a normal flight when he asked out loud Lightning McQueen trivia. He asks, “For $5 what number is Lightning McQueen?” Check out the viral video that now has 5 million views:

Way to go to the kid that spoke up! We personally would absolutely love to join in on some Disney trivia questions while on a plane. This should be a thing! With Southwest introducing their 50th Anniversary wrapped plane in Orlando, this could be a perfect way to keep Disney fans occupied while onboard.

Would you have known the answer is “95”?