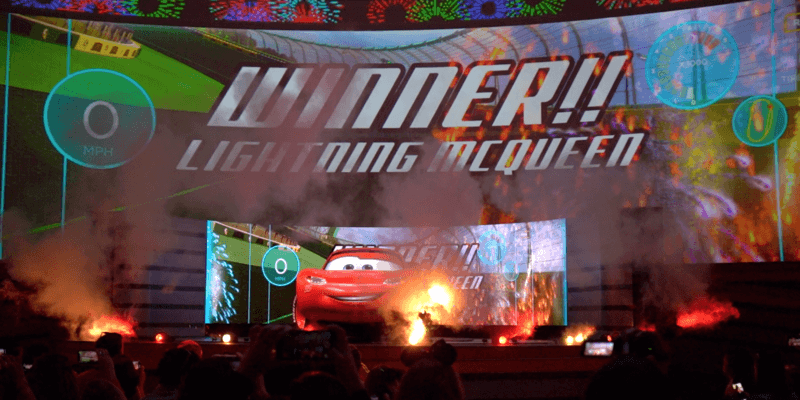 Lightning McQueen’s Racing Academy officially opened at Disney’s Hollywood Studios this weekend and the experience is a racing good time, as it lets guests virtually hit the track with McQueen for an epic race with Chick Hicks!

The all-new show lets fans of the Disney-Pixar favorite “Cars” race a virtual lap with McQueen in what begins as a preview of a “racing simulator” found at the Racing Academy. It then turns into a challenge against Chick Hicks, McQueen’s main rival in “Cars 3.”

The experience begins with Lightning McQueen coming on stage to greet fans and discuss the reasoning for the opening of his new racing academy, which is to teach rookie racers how to be a good racer! This then leads to the famous race car going into one of the simulations, only for it to end abruptly after becoming “corrupted.”

As it turns out, Chick Hicks is behind the corruption, who comes on the monitor to say how the car hacked into the simulator to race against McQueen to finally see who is the better racer, once and for all! This turns into an exciting video simulator adventure featuring lights, smoke, action, Lightning McQueen and Chick Hicks, and some of McQueen’s friends from the film.

The attraction isn’t all fans can enjoy from this new addition to the park. Guests can also see Lightning McQueen’s Pit Crew, who perform right outside the experience’s building off and on from 10:00 a.m. to 6:00 p.m. daily.

The Pit Crew dance and sing along to popular hit songs, inviting little ones to get up and dance! The performers also set up fun games for kids and those who’d also like to join in on the fun, making the racing experience even grander.

Guests to this area can also pose for pictures with Cruz Ramirez and DJ between dancing!

If you want to take part in this all-new experience, head over to Lightning McQueen’s Racing Academy, located on Sunset Boulevard, right next to the Rock ‘n’ Roller Coaster Starring Aerosmith and the Twilight Zone Tower of Terror at Disney’s Hollywood Studios!

Disclaimer: Disney invited Inside the Magic out to Disney’s Hollywood Studios to take part in experiencing this attraction first-hand.

Lightning McQueen’s Racing Academy, an all-new show based on the “Cars” franchise, is getting ready to park at Disney’s Hollywood Studios on March 31. When the show arrives, some additional “Cars”-themed fun will take place outside Sunset Showcase.

Cruz Ramirez, the trainer-turned-racer who was introduced in “Cars 3,” will meet and take photos with fans outside the Academy. In addition, DJ, the ultimate party car from Route 66, will get guests revved up with “DJ’s Ready! Set! Party Time!” several times daily. Disney shared this video of DJ hitting the road to make his way from Disneyland Resort to Walt Disney World in time for the party.

As Disney previously shared, at Lightning McQueen’s Racing Academy, the fan-favorite “Cars” character will demonstrate what he’s learned over the years using a state-of-the-art racing simulator and wrap-around screen. Of course, things don’t go as planned, but luckily, his friends Tow Mater, Cruz Ramirez, and other pals from Radiator Springs are there to root him on while he gets back on course.