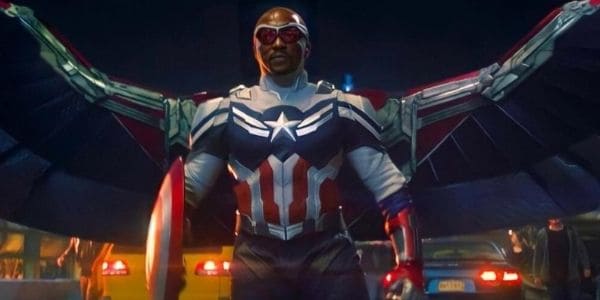 Anthony Mackie has some ambitious plans for his home state.

Mackie has been a huge part of the Marvel Cinematic Universe recently. His character, Sam Wilson/Falcon has been at Chris Evan’s Steve Rogers/Captain America’s side since Captain America: Winter Soldier (2014) and has helped Rogers with many different adventures as an Avenger. Falcon was there when Cap needed him the most in Captain America: Civil War (2016) when the Sokovia Accords made them outlaws.

After Steve traveled back in time to return the Infinity Stones in Avengers: Endgame (2019), it was revealed that Cap had stayed back to be with Peggy Carter (Hayley Atwell) and gave the shield to Falcon. Last year fans got to see in the Falcon and the Winter Soldier how Mackie’s character became the new Captain America. This wasn’t an easy decision for Falcon as he originally gave up the shield in the series before taking it back from Wyatt Russel’s Captain America.

Now that Mackie’s character is Captain America, Marvel confirmed that Captain America 4 is in the works. Mackie may be excited to be Cap, but he has other plans to focus his attention on.

It was reported that Mackie has just purchased 20 acres of land across from the Interstate 10 Service Road at Read Boulevard which is near the Little Woods neighborhood of New Orleans East. The 43-year-old actor has confirmed that he plans to use the land to build a new movie studio called East Studios, LLC.

Related: ‘WandaVision’ Really Was One and Done, Marvel Finally Confirms

This shouldn’t come as a surprise for anyone who has followed what Mackie has been doing recently. The actor has recently spent more time producing as he worked on The Banker on Apple TV+ and Outside the Wire on Netflix. Mackie is also set to star in and executive produce Twisted Metal, a TV adaptation of the vehicular combat video game series for Peacock.

New Orleans Mayor, LaToya Cantrell went to Twitter to express her excitement for this new venture that she believes will help revitalize Lousiana’s film and tv industry:

The New Orleans East is making a comeback, bam💥👏

This is INCREDIBLE !!💛⚜️

The influx of productions will not only bring economic growth but job opportunities! pic.twitter.com/h0hlswdh1g

Related: Did Netflix Just Tease A Major Cameo For An Upcoming MCU Movie?

COVID has most definitely affected the industry and Mackie’s new movie studio will have a positive impact on New Orleans. According to Chris Stelley, New Orleans has around 20 movies and television shows being produced in the area and that will most likely be more once East Studios is built. It’s a very exciting time for Louisiana, but Mackie has been with his home state for a long time helping the community.

The actor had moved back after Hurricane Katrina to help with the relief effort alongside his family. His relatives are also helping in their own way as Mackie’s brother, is creating a $10 million STEM Nola Hub. Mackie’s cousin Earl and his wife also help with their own restaurant which will be conveniently near the new movie studio. It seems that Lousiana will be seeing more of Mackie, but it’s hard to say how much this recent purchase will affect Mackie’s career with Marvel.

Mackie will of course stick around as Captain America, but the actor’s time will be limited. There’s a good chance that his presence in the MCU may be minimal as the actor probably won’t have the time to appear in many post-credit scenes. With everything happening in the MCU right now, it’s hard to know when we will see Mackie’s Captain America next, but hopefully, it will be soon!

Do you think Mackie will give up Captain America in the next few years? Do you think he will stay acting after his movie studio is created? Let us know what you think in the comments section below!