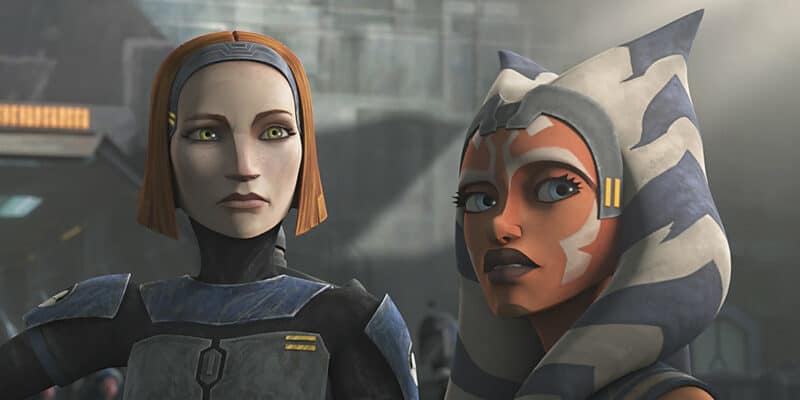 As well as her starring turn in the Star Wars franchise over the years, Battlestar Galactica alum, Katee Sackhoff more recently headlined Netflix’s Another Life.

Sackhoff is well-versed in the science-fiction genre, but despite her acting prowess, the popular streaming service has canceled Sackhoff’s show after just two seasons.

Rising to prominence in the 2004 re-imagining of Battlestar Galactica, where she starred as Lieutenant Kara “Starbuck” Thrace, Sackhoff has many television credits under her belt as well as a handful of big-screen motion pictures like the early 2000’s Halloween: Ressurection (2002).

Following her success in Battlestar, Sackhoff gained an even wider following when she voiced Death Watch and Nite Owls leader, Bo-Katan Kryze in Star Wars: The Clone Wars. The Mandalorian warrior would continue her Star Wars tenure in Dave Filoni’s Star Wars Rebels before finally transitioning to the live-action universe in The Mandalorian Season 2.

The mention of Sackhoff’s Kryze sparked excitement in the Star Wars fandom and her later appearance in Bryce Dallas Howard’s “Chapter 11: The Heiress” and Peyton Reed’s “Chapter 16: The Rescue” suggested fans would be seeing more of Sackhoff in the live-action Star Wars story further down the road — something which the actress herself has teased.

But, Star Wars aside, Sackhoff has concurrently starred in Netflix’s Another Life where she plays Niko Breckinridge. The sci-fi series follows Sackhoff’s astronaut and Salvare commander as she aims to discover the origins of an alien artifact.

Another Life Season 1 debuted in July 2019 with a second season beginning in October last year. Now, just three months later, Another Life has been canceled at Netflix. Sackhoff tweeted the news:

I’d like to thank everyone single person who watched & supported Another Life on @netflix To our crew & cast thank you for always working so hard & being prepared. I wish we could do more seasons but sadly it’s just not in the cards. See you on the next adventure. Love Niko

I’d like to thank everyone single person who watched & supported Another Life on @netflix To our crew & cast thank you for always working so hard & being prepared. I wish we could do more seasons but sadly it’s just not in the cards 🚀 See you on the next adventure ❤️ Love Niko

The news will surely come as a shock to fans of both Sackhoff and the sci-fi series in general, but the cancellation is not surprising considering its critical performance; noted by its less than favorable score on sites like Rotten Tomatoes.

For Sackhoff fans, though, the Star Wars galaxy is looking like the best place to next catch the actress. The Bo-Katan star, while not confirmed for any upcoming series, is perfectly poised to appear in multiple Star Wars series.

Duchess Satine Kryze’s sister’s return in Jon Favreau’s The Mandalorian Season 2 set the character on a quest to retrieve the fated Darksaber from Moff Gideon (Giancarlo Esposito), but in a dramatic turn of events, Din Djarin (Pedro Pascal) himself claimed the saber — and the right to rule Mandalore — after besting Gideon in combat. The duel came amid the dark trooper onslaught with Katan and Cara Dune (Gina Carano), among others, helping Djarin defend Grogu (“Baby Yoda”) from the Imperial attack.

So, there’s a chance Sackhoff’s Star Wars character could return in The Mandalorian Season 3 if her hunt for the Darksaber continues, or, the Nite Owl leader could also make an appearance in Rosario Dawson’s Ahsoka Tano series, Ahsoka. The two characters are intrinsically linked in the Star Wars universe, after all. Sabine Wren will appear in Ahsoka played by Natasha Liu — the Star Wars character that gifted Bo-Katan the Darksaber on Mandalore.

In fact, it was Bo-Katan that set Din Djarin and Grogu on the path to meeting Ahsoka on the planet Corvus. The latter was at war with the Magistrate of Calodan, Morgan Elspeth (Diana Lee Inosanto) in her search for Grand Admiral Thrawn, and most likely, Ezra Bridger.

With mentions in The Book of Boba Fett, as well as numerous loose ends, the shadow of Sackhoff’s Bo-Katan over the galaxy far, far away is only getting bigger.

Both seasons of Another Life are now streaming on Netflix.

Are you upset over Another Life‘s cancellation? Let us know in the comments down below!