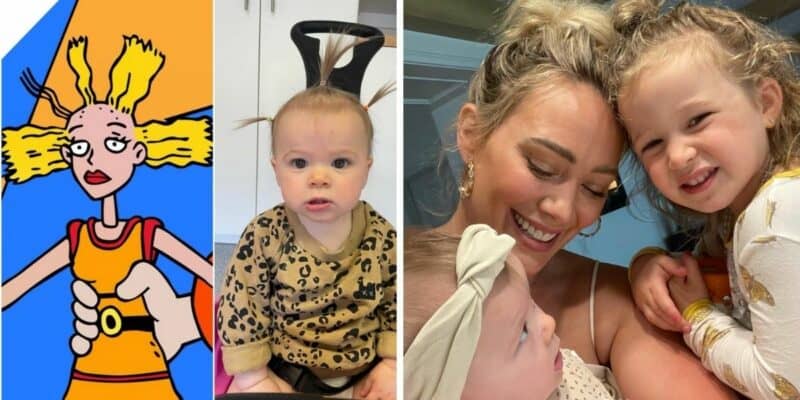 If you are a 90s baby, not only were you most likely a fan of Disney Channel’s Lizzie McGuire (2001), but you were also probably a fan of Nickelodeon’s Rugrats (1991).

Well, worlds are colliding several years later as Lizzie McGuire herself, Hilary Duff, has given her daughter a Cynthia hairstyle (the iconic doll from Rugrats).

Lizzie McGuire and Younger star, Hilary Duff, took to Instagram to share a hilarious photo of her daughter, Mae, with an iconic hairstyle. If you’ve watched Rugrats, you probably remember Angelica’s famous doll, Cynthia, with her crazy hairstyle.

Duff posted a side by side of the Cynthia doll from Rugrats along with her daughter, Mae, with the caption:

Long live Angelica’s doll Cynthia .. that cut was savage. Angelica, you and your doll always scared me buuut you WERE queen

The Lizzie McGuire and Younger star was recently under fire for breaking a California law, involving her three-year-old daughter, Banks Bair.

Duff was driving around with her former Younger costar, Molly Bernard (who plays Lauren Heller), and her daughter, Banks. Bernard posted a video of Duff and Banks in the backseat of the car; however, Banks was not in a carseat, which caused Duff to receive a ton of backlash, including being “mommy-shamed” by fans.

What do you think of Mae’s Cynthia-inspired hairstyle? Let us know in the comments below.