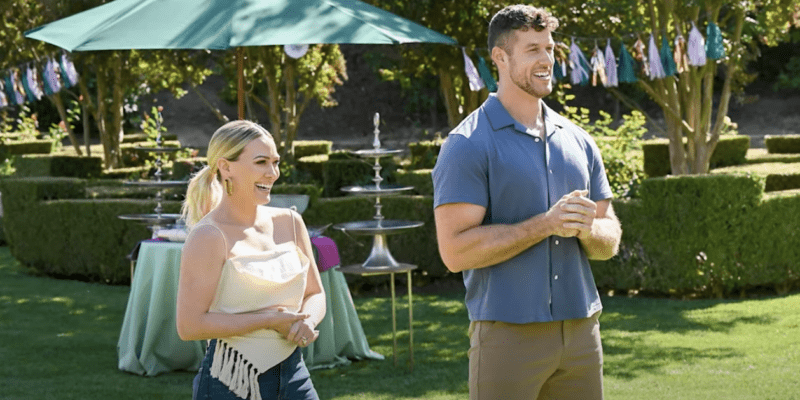 Did you ever think that the world of ABC’s The Bachelor and the Disney Channel would collide? I did not, but as both a Disney lover and reality show viewer, I am thrilled to see that it has.

The current Bachelor is Clayton Echard, one of the men on Michelle Young’s season who was eliminated before things became too serious. At the moment, Clayton is looking for love among the following women:

These are the ladies who are currently in the running for Clayton’s heart, as the following were eliminated after the first episode.

In many of the early episodes of the show, the dates are often large group dates, with a couple of one-on-one opportunities. That being said, we have started to see a lot of Guest Stars come in to host the larger group dates, and now, it seems pop sensation and Disney icon Hilary Duff is stepping into the ring!

As you may recall, Hilary Duff starred in Lizzie McGuire (2001), which became hugely popular among Disney fans. The show grew so big it had a movie spinoff in Rome titled The Lizzie McGuire Movie (2003). She was also featured in Cadet Kelly (2002), and on ABC’s Younger (2015). Duff is currently involved in the new How I Met Your Mother spinoff, How I Met Your Father, which is currently streaming on Hulu.

Also, as we have reported:

First introduced as one of Michelle Young’s suitors on the current season of “The Bachelorette,” new Bachelor Clayton Echard not only connected romantically with the captivating Minneapolis school teacher but was also a favorite of Michelle’s middle school students. Ultimately, however, Michelle sent Clayton home, leading to one of the most emotional and heart-wrenching moments in “Bachelor” history. In that one touching moment, Clayton’s genuine desire to find a partner and start a family was front-and-center, and never has it been so evident that one man deserves a second chance at finding that great love.

Nicknamed “Claynos” by his friends in the house due partly to his sculpted physique, Clayton grows stronger with every rose, opening himself up to Michelle in ways he never thought possible. This Midwestern man proves he is so much more than just a good-looking guy with a rock-hard bod. He’s a throwback romantic who’s not afraid to put himself out there for love.

Clayton graduated with a bachelor’s degree in health science from the University of Missouri, where he also minored in business and Spanish. He currently works in medical sales but is embarking on his MBA with the intention of starting his own business.

A walk-on for the University of Missouri football team, Clayton quickly became a scholarship player who took on a prominent role in guiding the team to back-to-back SEC championship games and a national top ten ranking. He even had a brief stint with the NFL’s Seattle Seahawks before quickly realizing his football abilities didn’t quite match his business acumen.

Back home in Missouri, Clayton enjoys spending time at his family home on Lake St. Louis. You can often find him there tubing out on the boat, fishing off the dock or getting competitive over some cornhole with his friends, his two younger brothers and his mom and dad.

Growing up in the idyllic suburbs of St. Louis, Clayton had the perfect example of what marriage and love can be. His parents, Brian and Kelly, have been married for 29 years, and their relationship is precisely the kind Clayton so desperately wants for himself. Just like his parents, Clayton’s looking for a partner, a great love and a best friend.

Are you a fan of The Bachelor? Will you be watching Hilary this evening?