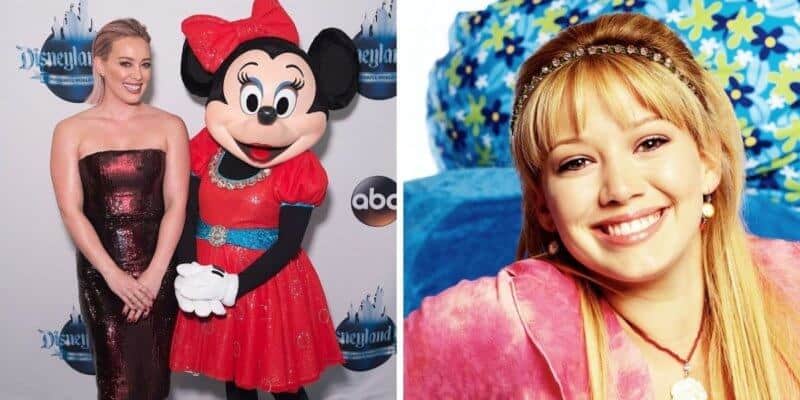 It wasn’t too long ago that Lizzie fans learned of the cancellation of the highly anticipated Lizzie McGuire reboot, which left many disappointed and upset.

In case you weren’t aware, the reboot sounded like it would be epic. The original cast of the Disney Channel show were all expected to return to reprise their roles — including Hilary Duff (Lizzie McGuire), Hallie Todd (Jo McGuire/Lizzie’s mom), Robert Carradine (Sam McGuire/Lizzie’s dad), and Jake Thomas (Matt McGuire/Lizzie’s brother).

Despite the sequel series being canceled due to conflicting interests between Duff and Disney, it looks as though there are no hard feelings between the two, as Duff recently took to Instagram to post a story of her Gucci sneakers featuring the one and only Mickey Mouse!

Along with the photo, she wrote “Mouse and I still friends” with a heart. The subtle message may give fans of the company and the actress hope.

So there you have it! Even though the Lizzie McGuire reboot series has been officially canceled, it’s great to see that Duff still loves the main mouse himself and is continuing to share her love of Disney.

It’s been a long road for the sequel series ever since it was announced at the D23 Expo in 2019.

When the series was first announced at the D23 Expo, it was said that the show would pick up when Lizzie turns 30 years old. “Just like me and everyone who loved Lizzie and grew up with her, Lizzie has also grown up,” Duff said at the 2019 D23 Expo. “She’s older, she’s wiser, she has a more expensive show budget…she has her dream job…she has her dream guy…she has her dream apartment…and she’s about to celebrate her 30th birthday.”

However, since then, a lot has happened. Terri Minsky was the Lizzie McGuire creator who, back in January 2020, decided to step away from her showrunner and executive producer role in the revival due to “creative differences.”

And, back in February, we reported that Hilary Duff suggested the Lizzie McGuire reboot was not exactly “family-friendly” enough for the Disney streaming service. Just as the Love, Simon spinoff series — Love, Victor — was moved to Hulu, it looks as though that is the same reason why the original show creator was also taken off the project — for “family-friendly” reasons.

Are you glad to see Duff “still friends” with Mickey Mouse? Let us know in the comments below.