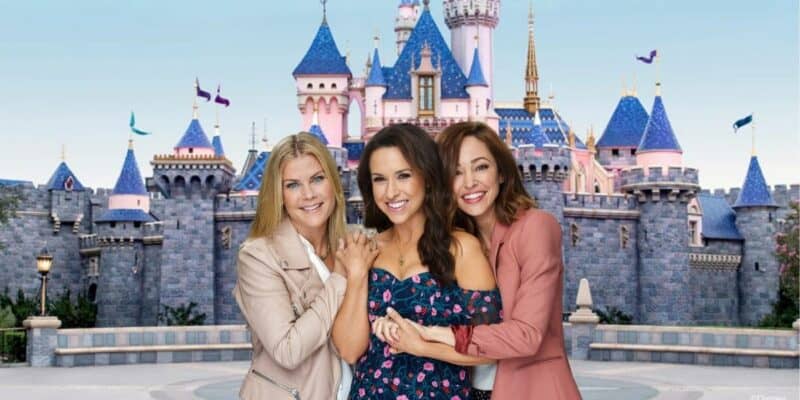 Many celebrities are fans of the Disney Parks, including John Stamos, the Kardashians, Courtney Cox, and more. However, not every celebrity is eager to bring their children to the Parks right now, including Hallmark star Autumn Reeser, which is shocking her costars Lacey Chabert and Alison Sweeney.

The three Hallmark stars were recently featured on The Kelly Clarkson Show where they not only discussed the Hallmark movie trilogy, but also what they enjoy doing in their free time, which is where Lacey Chabert mentioned the three girls bond over most things — with the one big exception being trips to Disneyland.

Both Chabert and Alison Sweeney are fans of the Disney Parks, but Autumn Reeser, on the other hand, just admitted she has never taken her kids, which shocked her costars.

The Hallmark movie star explained to Kelly Clarkson that “the expense” and “the crowds” were two of the biggest reasons why she hadn’t gone or taken her kids yet:

The crowds and pricing is something that many Disney Parks fans have complained about. In fact, the current Walt Disney Company CEO, Bob Chapek, has received a lot of backlash as many feel he only cares about the money, and not about the Guests or “Disney magic,” which has even led to a petition asking the company to fire the Disney CEO.

Clarkson seemingly did not understand where Reeser was coming from as she responded with a simple “What!”. Sweeney also admitted both she and Chabert were completely shocked when Reeser initially told them she had never taken her kids to Disneyland:

“We were floored. I feel like Lacey almost fell out of her chair when she found out.”

What do you think of this situation? Do you agree with Hallmark’s Autumn Reeser? Or do you think she should take her children to Disneyland for the experience? Let us know in the comments below.