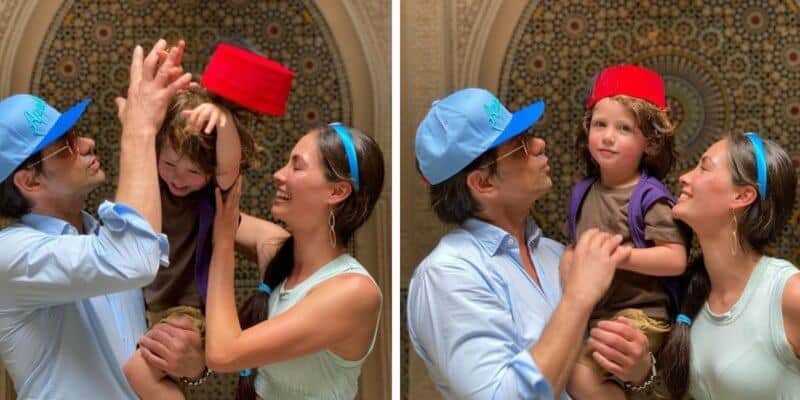 If there is one celebrity that we can count on for being a huge Disney fan, it’s John Stamos.

Stamos has recounted his love for Disney a multitude of times, from always visiting the parks to starring in the hit Disney+ series Big Shot, which has just been renewed for a second season. Stamos is married to his wife Caitlin McHugh Stamos, and the two share a son, William “Billy” Christopher, who is now 3.

Check out this adorable photo of the family at Disney World!

My sweet wife loves #Disneybounding, my sweet son, not so much! #Jasmine #Genie #Abu

During an interview, John Stamos spoke about Billy and disclosed whether or not he followed in his dad’s footsteps in his love for Disney. Of course, being 3 years old, it is hard to imagine that any young child would not love the theme parks, and it seems Billy will stick to the status quo on this one!

Stamos shared his experience of taking Billy to Disney World and called him a Disney kid,” Stamos says that “it’s wonderful to see Billy get excited about stuff now.” Stamos has been taking Billy to the Disney Parks ever since he turned one, but it seems that the parks are not what makes Billy a Disney fan (although he loves it there, too), but rather, the movies.

“His first movie he loved that he watched was Coco. [He watched it] before he could barely talk. He was like ‘Coco, Coco.’ He loves Coco, he loves Moana. He loves those animated [films].”

That being said, we are not sure if Billy will ever top his father’s love for Disney. John Stamos got engaged to Caitlin at Disneyland, and then when the two got married, they took their honeymoon in Disney World. Stamos also owns some very coveted Disney items that many fans would clamor for. From Walt Disney’s personal phone to a Pirates of the Caribbean animatronic head to an “it’s a small world” doll, Stamos has truly built up quite the collection.

What do you think of this adorable story? Let us know in the comments below!