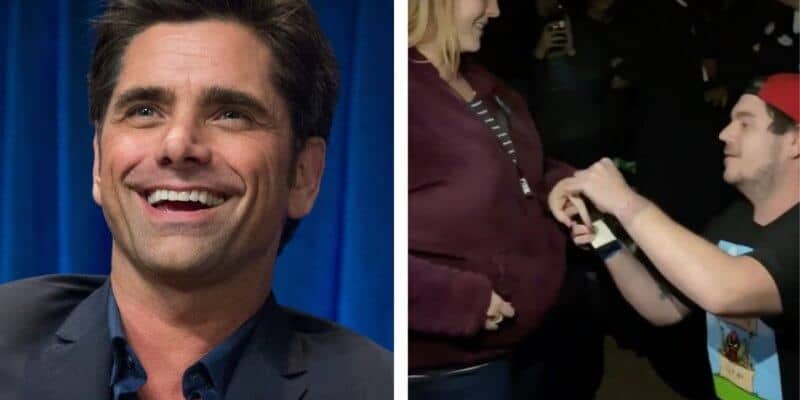 Walt Disney World — ‘The Most Magical Place on Earth’, which also means the most magical place to get engaged!

And that’s exactly what this couple just did, with the help of a very special someone.

John Stamos has been spending some time in Walt Disney World recently, especially for the opening of Star Wars: Rise of the Resistance, but that’s not the only thing the Fuller House star has been up too.

Stamos has just assisted a beautiful couple with their engagement! One of Stamos’ reps told PEOPLE that Stamos was just about to get ready for nightly the fireworks display at Magic Kingdom alongside his wife, Caitlin McHugh. That is when a man spotted Stamos and then approached him, initially asking for a photo.

The man appeared to be extremely nervous so Stamos asked if the man was okay, in which the man then replied, “I’m about ready to propose to my girlfriend, will you help me?”

Of course, The Little Mermaid Live! star just couldn’t say no and his rep explained that they lined up to make it look as if they were about to take a picture. The girlfriend got into position for their group picture, which is when the man dropped down on one knee and turned to Stamos, saying, “You’re John Stamos! What should I do?”

At the same exact time, the lights dimmed down Main Street U.S.A. as the fireworks started going off, so there was only one thing to do.

Stamos immediately took matters into his own hands and told the man he would take care of it. He asked McHugh, his wife, and everyone around her to shine a light on the couple.

The rep then explained that McHugh filmed the surprise proposal, which Stamos shared on his own Instagram profile on Thursday.

In the clip below, you will see Stamos hug the newly engaged couple as the man tells him, “That just made it so more special.”

To assist with an engagement anywhere is an honor, but at @waltdisneyworld right as the fireworks began? That’s magical! Congrats kids!

Stamos captioned the post with “To assist with an engagement anywhere is an honor, but at @waltdisneyworld right as the fireworks began? That’s magical! Congrats kids!”

The groom-to-be showed his appreciation on Twitter, writing at John Stamos with, “Thank you all. It was so much more magical to have him help out. Thank you so much, I will forever be grateful @JohnStamos.”

John Stamos is a huge fan of The Disney Parks himself and is also very special to him as Disneyland is where Stamos proposed to his wife in 2017 and Walt Disney World is where they honeymooned. Stamos is known for visiting Walt Disney World on a regular basis as well as showing off some of his favorite characters by Disney bounding.

Congratulations to the happy couple! Have you ever gotten engaged at Walt Disney World? Let us know in the comments.