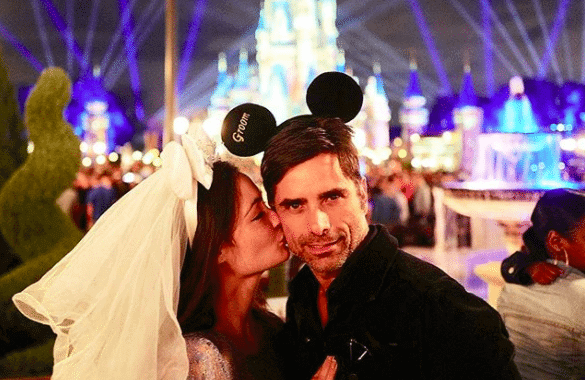 “Full House” star John Stamos and his new wife Caitlin McHugh are spending their honeymoon at Walt Disney World, and the couple also found time for Stamos to perform with The Beach Boys at Universal Orlando.

Stamos and McHugh, who are both big Disney fans, got engaged at Disneyland in October. The elaborate proposal included video clips of their favorite Disney films, ending with “The Little Mermaid” and a caption reading “Just ask the girl.”

I asked…she said yes! …And we lived happily ever after?

After getting married at the Little Brown Church in Studio City, California, the happy couple headed to Walt Disney World. McHugh is known for Disneybounding, which involves wearing outfits inspired by favorite Disney characters, and she shared a few of her looks on Instagram.

Perfect way to begin our #happilyeverafter Can you guess who we’re #disneybound -ing as? (Hint: I’ve painted the walls in the tower in the background)

The couple, who are expecting their first child this spring, may have picked up some Dumbo-themed gifts for their little one at Disney Springs. McHugh shared this sweet picture with a quote from the classic Disney movie: “The very things that held you down are going to lift you up, up, up.” Stamos has occasionally performed with The Beach Boys since 1985, and their song “Forever” was featured twice on “Full House” — once during Uncle Jesse and Becky’s wedding, and once after the birth of their twin sons.

Thanks to TODAY, here’s Stamos and The Beach Boys performing “Forever” at Universal Orlando.

If you missed them at Universal Orlando, you have a few more chances to see The Beach Boys and John Stamos perform.