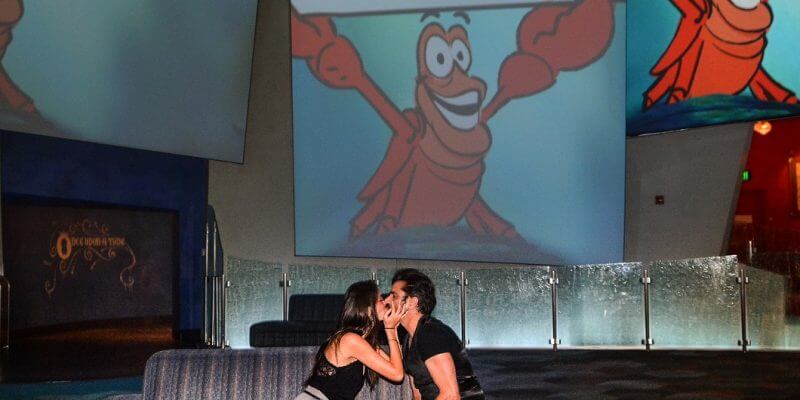 It’s no secret that “Full House” star John Stamos is a big fan of Disneyland— he grew up attending the park and now owns the huge “D” from the park’s original sign, which currently resides in his Beverly Hills backyard.

So when it came time yesterday for Stamos to propose to his girlfriend, actress Caitlin McHugh (of “The Vampire Diaries”), where else would he choose to pop the question but at the Happiest Place on Earth?

I kissed the boy and said…yes! That’s what you do when the sweetest, most romantic Prince Charming treats you like a princess and asks you to be his ?

Stamos and McHugh reclined on a sofa in the Animation Academy building at Disney California Adventure, where they were treated to a montage of romantic scenes from Disney animated features, followed by an image of Sebastian the crab from “The Little Mermaid” urging him to make the next move. “I kissed the boy and said… yes!” said the bride-to-be on her Instagram account.

Uncle Jesse Katsopolis himself then shared a custom illustration to his Twitter, which depicts the happy couple embracing in front of Sleeping Beauty Castle.

I asked…she said yes! …And we lived happily ever after? pic.twitter.com/6vp2raHgCq

This past summer at D23 Expo 2017, John Stamos hosted a conversation between Walt Disney Imagineers Tony Baxter and Marty Sklar (the latter of which unfortunately passed away soon after.

Congratulations to the happy couple living Happily Ever After!