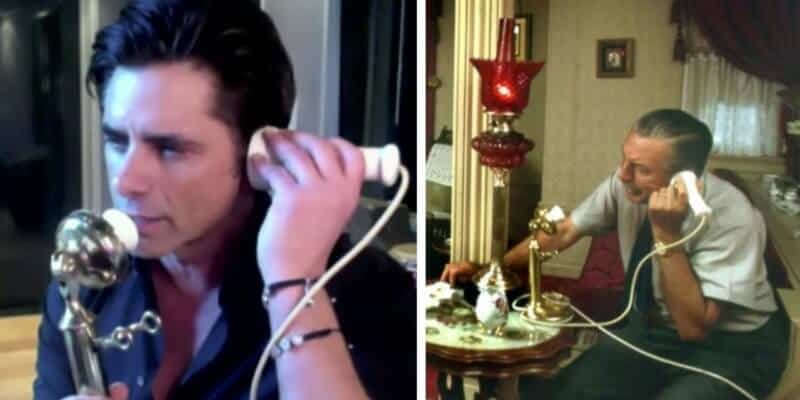 It is no surprise that John Stamos, classically known for his role of Jesse Katsopolis in Full House, is a huge Disney fan.

Stamos has been known to venture into Disneyland quite often — he got engaged there!

He even shared an inspirational post when the parks closed due to the ongoing pandemic over a year ago, and then took to social media once again to share his rejoicing of the recent news that Disneyland was  going to reopen to the (California resident) public on April 30.

During the pandemic, Stamos even read Disney bedtime stories on YouTube for all to hear. All of this being said, it is quite clear that Stamos loves Disney quite deeply — and he’s perhaps even the ultimate Disney fan.

Most recently, on The Ellen DeGeneres Facebook page, an interview with John Stamos and Howie Mandel (notably recognized from his hosting on game show Deal or No Deal) was released in which Stamos revealed his ultimate Disney collectibles that many Disney fans could only dream of owning. Stamos owns a lot more Disney memorabilia than what he shared during the interview, but here are a few favorites!

First off, he shared a vintage phone with Howie in their socially distant video interview, and then went on to explain that the phone actually belonged to Walt Disney himself! It was used in the apartment above firehouse on Main Street whereWalt Disney spent a lot of time at Disneyland. Stamos even hilariously pretended to have a conversation with the legend himself.

Then, he continued to share the head of one of the audio-animatronics from Pirates of the Caribbean. Considering this is another attraction that Walt was part of bringing to life at the Happiest Place on Earth, to own a piece of history like that is truly amazing and magical.

Then, Stamos pulled out a full doll from “it’s a small world”! Howie was joking with Stamos telling him that he can’t just take things from Disney attractions –“They say to keep your hands inside the boat!”

Stamos even told Howie he could find his house by looking for the one with the big “D” on the back, which, of course, stands for Disney.

John Stamos will next appear in Big Shot, a Disney+ series that has had a rough go during the pandemic, continuously closing down due to positive COVID-19 cases.

If you could pick one of John Stamos’s Disney items to own for yourself, which would you take?