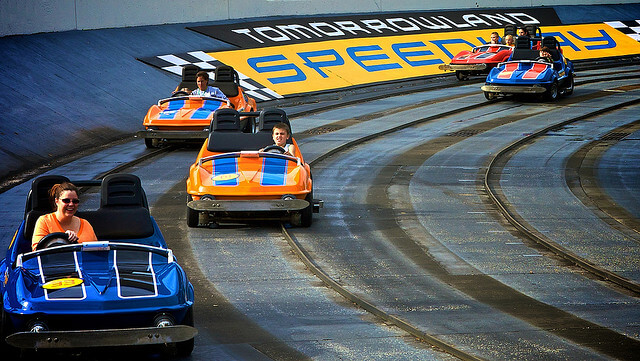 While Walt Disney World is filled with legendary and iconic rides and attractions, there are always big changes happening at “The Most Magical Place on Earth”. From Splash Mountain being rethemed to brand new rides like the highly-anticipated TRON roller coaster, Walt Disney World Guests can always expect something new to look forward to.

However, sometimes Disney doesn’t quite get the hint and Disney Guests and fans alike are stuck voicing their concerns to reach each other. Disney fans take it upon themselves to get a specific ride or attraction to change and in the form of the Tomorrowland Speedway, Guests have been calling for Disney to change it for a long time.

Over the years, public opinion has shifted quite a bit on the iconic ride, with many calling it an old relic of the past. The ride, which gives Guests great views of Cinderella Castle and Space Mountain, is a Disney classic and an important part of the Park. But many Guests can’t help but think it’s time for a retheme or even a total demolishing.

I was just there and was joking with my son that there is a hole in the Ozone layer directly above this nightmare.

Did it with my kids last month, and yeah, though they liked it, I have to be honest and say I wouldn’t miss it. It’s a relic. It takes up so much space. The cars are just so annoyingly loud. The amount of oil stains on the ground, the gas… ugh. They either need to convert them to electric, which is likely prohibitively expensive, or just knock it down and get all that valuable MK space back. It never really fit in Tomorrowland anyway IMO

It’s a nightmare, especially in the warmer months where you’re just exposed to the sun the whole time. It definitely needs to go. It takes up a lot of space too!

It’s a relic, it smells, it’s noisy, it’s exactly what 11 year olds love in a car ride. It’s one of those rides we all have to recognize that is/should be tailored to 11 year olds rather than adults on this sub

While there isn’t a definitive opinion on the Tomorrowland Speedway, most Guests tend to lean toward wanting the ride to either be replaced or something new entirely take up its space. Over the last few years, Guests have been wondering what could happen to the ride, with many theorizing a Wreck-It Ralph retheme would happen.

Speaking of attraction rethemes in the Magic Kingdom, Splash Mountain is receiving quite a controversial re-do in the near future, switching out The Song of the South (1946)for a story based on The Princess and the Frog (2009). In recent years many have been calling Disney to drop the original theming of the ride, saying the film it was based on has racist and offensive undertones and stereotypes. While there is no official start date for this retheme, many Guests are excited and interested to see how it turns out.

Find more on the Tomorrowland Speedway at the Magic Kingdom below:

how do you feel about this old attraction at the Magic Kingdom? Let us know in the comments below!