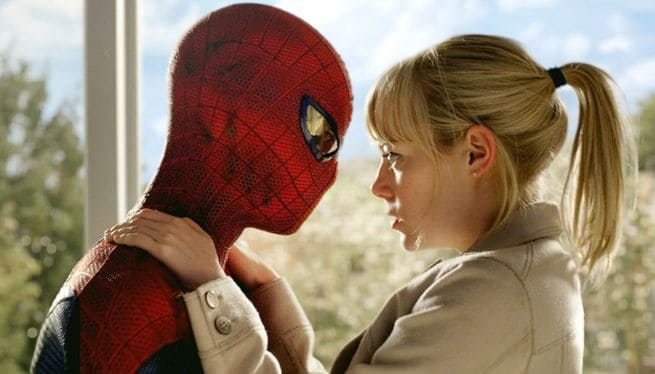 Before Spider-Man: No Way Home (2021) came out, the idea of who would star in the film was a massive mystery.  Of course, we expected to see Tom Holland (Peter Parker/Spider-Man) and Zendaya (MJ) joined by Benedict Cumberbatch (Doctor Stephen Strange), Jon Favreau (Happy Hogan), Marisa Tomei (Aunt May), Jacob Batalon (Ned Leeds) in the MCU film directed by Jon Watts. We did not, however, see Tobey Maguire or Andrew Garfield in the trailer, so their appearance continued to remain a mystery.

We also saw that Alfred Molina’s Doc Ock, Willem Dafoe’s Green Goblin, Jamie Foxx’s Electro, plus Thomas Haden Church’s Sandman character, and Rhys Ifans’ Lizard from alternate universes will all return. Knowing this, many fans started to assume that Garfield and Maguire would be back.

During The Amazing Spider-Man (2012) and The Amazing Spider-Man 2 (2012), we saw Andrew Garfield’s Peter Parker/Spider-Man character have a romantic relationship with Gwen Stacey. The two were partners in real life as well, leaving viewers swooning over their on-screen chemistry. Of course, it was tragic when we saw Gwen fall to her death which took her out of the films, but with Spider-Man still alive, many expected a third film that never came to fruition.

During the hype of No Way Home, it seems that Emma Stone was bugging Andrew Garfield about his potential appearance in the film. Culture Crave (@CultureCrave) Tweeted a portion of an interview in which Garfield noted that he had to lie to Stone, who seemed to call his bluff!

Following Spider-Man: Far from Home (2019) and Spider-Man: Homecoming (2017), on December 17, we were all able to learn that Garfield was indeed in the film, and actually would have a touching and resolving moment that recalled the tragic scene he and Stone shared where her character fell to her death.

Thanks to the resurgence of all three Spider-Man actors, box office records continued to break records. As we reported when the film debuted, Deadline noted that the Jon Watts-directed film was “eyeing [a] $200M+ opening” and that it “hopes to land among [the] top 7 domestic debuts of all-time.” Now, Spider-Man can join the ranks of Avengers: Endgame (2019) and Avengers: Infinity War (2018) as No Way Home has secured the second highest-grossing opening weekend of all time.

What do you think about this story? Let us know in the comments below!