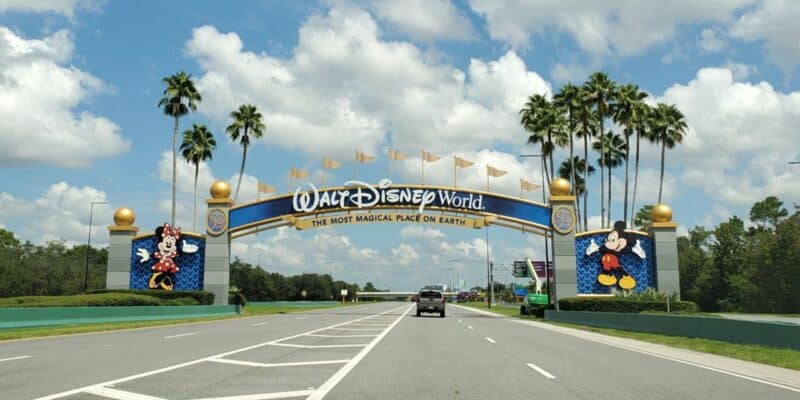 Things are starting to get exciting in the Walt Disney World Resort!

So much is changing at Walt Disney World in Orlando, Florida. From new and exciting rides like the upcoming TRON coaster or the complete transformation of EPCOT, Disney Guests have a lot to look forward to. One of the most exciting things is the new Star Wars: Galactic Starcruiser hotel.

Sadly, some of these changes mean things of the past have to be changed or replaced, leaving the more nostalgic Disney Guests feeling a bit sad. While Disney World has iconic imagery, few sights compare to the purple, red, and green road signs that populate the entire Disney World bubble.

Recently, Guests have spotted these purple signs being covered up and replaced by the new blue and yellow signs. In a post on Twitter, you can get a closer look. See the post from @MagicbandManiac on Twitter below:

New road signs are up and it looks like they are changing the color of them.

New road signs are up and it looks like they are changing the color of them. pic.twitter.com/Uq0ADsdMAT

While sad, it is exciting to see things starting to come together for the upcoming Star Wars: Galactic Starcruiser. Filled with interactive experiences like lightsaber training as well as a fully interactive bridge, the Starcruiser will offer Star Wars fans the ultimate immersive experience. This experience will come at a pretty high cost, however. The cheapest option offered to Guests is a whopping $4,809 for two occupants in a single stateroom on a two-night journey. The price for four Guests jumps to just under $6,000 for the same amount of time, meaning you’ll need a lot of galactic credits or need to know a bounty hunter or two to afford a stay on this luxury “ship”.

Star Wars: Galactic Starcruiser could pave the way for the next generation of themed Resorts and it’s incredibly exciting to see what it will offer Guests when it opens. The Resort is currently booked solid for the month of March, meaning its maiden voyage will be completely full of excited Star Wars fans.

As mentioned earlier, Star Wars: Galactic Starcruiser is just one part of Star Wars: an expansive land-themed around the sequel trilogy of Star Wars films released by Disney. This incredibly-detailed and immersive land features some creative cuisine, beautiful landscaping, and iconic characters like Rey, Chewbacca, and Kylo Ren.

Do you have a stay booked at Star Wars: Galactic Starcruiser? Let us know in the comments below!