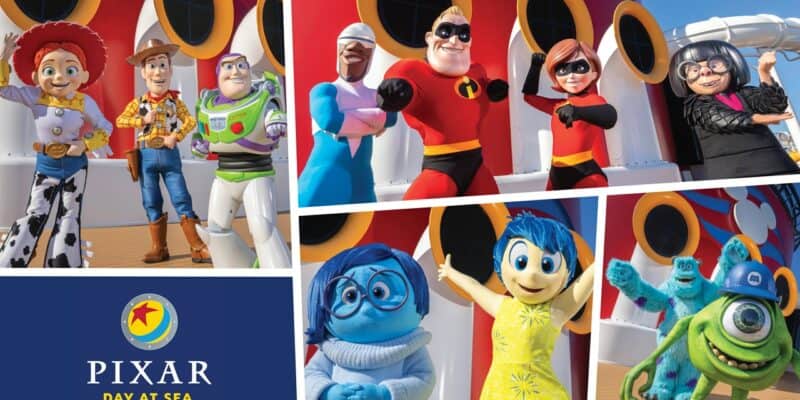 Fans of Disney Pixar and Disney’s Cruise Line have a lot to look forward to very soon!

JUST ANNOUNCED: Your Pixar Pals are on board for an all-new playful day on select 7-night cruises sailing January – March 2023!

JUST ANNOUNCED: Your Pixar Pals are on board for an all-new playful day on select 7-night cruises sailing January – March 2023! https://t.co/X11fqN1dwc pic.twitter.com/8kOhK1Srqm

According to Disney, Pixar Day at Sea will be included on nine select Disney Fantasy cruises from January through March 2023. These cruises will be departing from Port Canaveral, Florida, the Disney Fantasy, and will sail to several guest-favorite destinations in the eastern and western Caribbean. Eastern Caribbean itineraries feature stops in ports such as Tortola, St. Thomas and San Juan, Puerto Rico, while western Caribbean sailings visit Cozumel, Mexico; Grand Cayman; and Falmouth, Jamaica. Every cruise includes a visit to Disney’s private island oasis, Castaway Cay.

More on Pixar Day At Sea:

In other exciting news, the Disney Cruise Line is about to get another ship!

Joining the Magic, Dream, Fantasy, and Wonder, the Disney Wish at port Canaveral and Everglades will be another incredibly innovative addition to the Disney Cruise Line. The Disney Wish will be filled to the brim with magic, including a first-of-its-kind AquaMouse, a Disney attraction at sea, similar to the AquaDuctk. The ship will also feature some fantastic dining opportunities for the whole family, with restaurants themed to your favorite character, scenes,s and music from Frozen and Marvel, and even a Star Wars lounge area!

Even though there are so many exciting things going on with the Disney Cruise Line, many Guests are a little hesitant to climb aboard one of the four ships as the COVID-19 pandemic continues to rage on. As of last month, the CDC advises against traveling on cruise ships due to the uncertainty of COVID-19 and the Omicron variant. Recently, all four of the Disney Cruise Line ships underwent a full CDC investigation due to COVID-19 cases recorded on ships, leaving many Guests stuck onboard the ships.

Are you planning on embarking on a Disney Cruise soon? Let us know in the comments below!

There are so many fun experiences for the whole family aboard Disney Cruise Line, from incomparable dining to Broadway-caliber shows. Don’t forget to check out Academy Travel so you can book your next vacation with an Authorized Disney Vacation Planner and take advantage of some amazing deals and experiences on your upcoming trip. We love using Academy Travel to make our Disney Cruise Line and other Disney vacations a total breeze — and they always make sure your vacation is as magical and affordable as possible. Plus, you can even get a free, no-obligation quote — no credit card required. Click here to book your Disney Cruise vacation with Academy Travel!