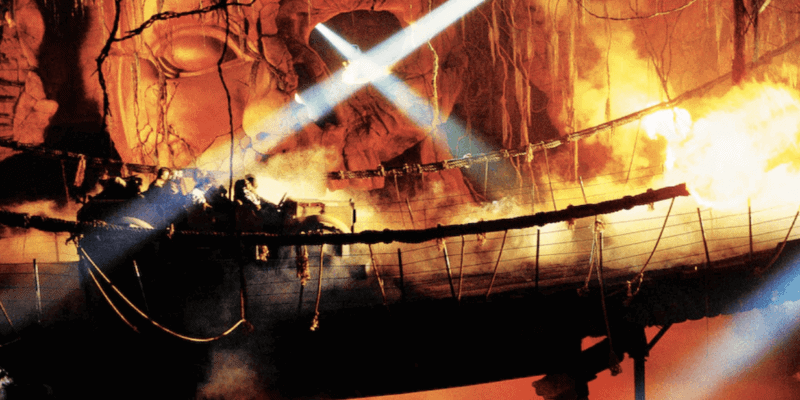 Disneyland is filled to the brim with exciting rides and attractions such as the Haunted Mansion, Matterhorn Bobsleds, “it’s a small world”, Splash Mountain, and Peter Pan’s Flight. There are so many choices Guests can choose from that deciding on what to wait in line for may prove difficult. However, if there’s one thrill ride you have to experience when visiting Disneyland, it has to be the Indiana Jones Adventure.

The Indiana Jones Adventure is located in Disneyland and is considered a classic in both Disney Imagineering history and in Disney Park history. The ride is based on the Indiana Jones franchise and takes guests on an exciting and thrilling journey through a cursed temple. Since opening at the Disneyland Resort, it has become a fan-favorite and beloved attraction in the Disney Parks and continues to entertain thousands of Guests every day. Below is everything you need to know about this impressive and now-iconic attraction at the original Disneyland Resort.

While there are so many great attractions at Disneyland, few come close to matching the immersion and theming of the Indiana Jones Adventure. The ride was originally conceived for the Disneyland Resort due to the success of the Indiana Jones Epic Stunt Spectacular in Disney’s Hollywood Studios in Walt Disney World. The stunt show featured multiple sets and characters themed around the first Indiana Jones film with the premise that Guests were watching how a real film studio works. Because of how popular the attraction was and still continues to be, Disney and George Lucas partnered up to create a new attraction for Disneyland that would blow Guests away.

George Lucas and Disney previously teamed up in 1987 for the release of Star Tours in Tomorrowland. This ride (at the time) was a state-of-the-art attraction placing Guests right in the middle of their very own Star Wars adventure. Since its opening, the ride has remained popular, with it undergoing a huge refurbishment in 2011, adding even more scenes and characters to the ride like Darth Vader and Princess Leia as well as new characters like Kylo Ren, Rey, and Poe Dameron. More on Star Tours – The Adventures Continue below:

Groundbreaking for the Indiana Jones-based attraction, originally called Temple of the Forbidden Eye, occurred in August of 1993. More than 400 Imagineers worked on the attraction’s design and construction. Just like Joe Rohde with Disney’s Pandora – The World of Avatar, this ride also had a main Imagineer that truly spearheaded the attraction, this time in the form of legendary Disney Imagineer Tony Baxter. Baxter is well known in the Disney community and is responsible for rides like Big Thunder Mountain and Splash Mountain as well as Disneyland Paris.

Related: Police Action Taken For 20 Incidents at Disneyland in December

The ride, which was then called The Temple of the Forbidden Eye officially opened on March 3, 1995, and featured quite the fanfare. Tons of celebrities were invited, with the list of attendees including George Lucas, then Disney CEO Michael Eisner, Ghostbusters star Dan Aykroyd, The Mummy star Brendan Fraiser, Arnold Schwarzenegger, Tony Danza, and Star Wars icon Carrie Fisher. The ride was an instant classic, to say the least. At the time, Disneyland really didn’t have that many thrill rides of this caliber in the Park, and because California Adventure had not even opened yet, the Park desperately needed another big “E-ticket” attraction.

See Disneyland’s official description of the ride below:

Because of the way EMV-based attractions are designed, the individual ride vehicles can be altered and animated to simulate terrains of all kinds, meaning Disney could program these ride vehicles to simulate a prehistoric landscape. All Disney had to do was essentially build another Indiana Jones Adventure and then retheme it to fit the land. This was a clever and efficient way to add a big attraction to Disney’s new Animal Kingdom Park. Check out more on Disney’s DINOSAUR here.

The story of the Indiana Jones Adventure involved you, a cursed temple, and Indiana Jones himself. This temple, known as The Temple of the Forbidden Eye is where Guests embark on their adventure on the search for one of three gifts. As soon as your ride vehicle pulls out of the loading dock, Guests approach the Chamber of Destiny, a hallway that leads into one of three doorways. This feature on the ride is incredibly famous as Guests will never know which doorway they will enter. Originally, this effect was achieved through the three doors actually being fake, moving on a track that lines up with the one true door. The track doesn’t change but the room rotated in a way that made it look like you were going through a new doorway each time you rode the ride.

Unfortunately, however, this effect was damaged or broken and has not been used for many years. Now the effect is done through lighting and projection mapping, a cool but not as convincing effect. After entering through one of these three doors, Guests are reminded by Sallah (Bob Joles) to not look into the eyes of Mara, the god of the temple. But as soon as Guests start moving toward the idol, Mara’s eyes open, taking the ride n a dangerous detour.

From here Guests are taken on a journey involving giant snakes, lava, fire, and a whole lot of impressive effects. Here is where the attraction truly shines. After this turn of events, Guests pass Indy as they embark on an epic adventure. Guests pass Indy and head into a giant room where they can see other Guests who are stuck on the same perilous journey. Guests then head into a creepy cave filled with skeletons all over the place. After passing through a bug-filled hallway, Guests face a drawbridge and head straight toward other Guests, narrowly avoiding a collision.

Next Gests encounter a huge snake animatronic and head straight toward a seemingly-safe hallway when all of a sudden darts start shooting right over Guests’ heads. While many guests would be convinced they are narrowly avoiding being struck with one of these poisonous darts, the effect is achieved through simple blasts of air.

The ride comes to a halt when Guests see Indy hanging from a rope at the end of a ramp. While Guests may feel as though the dangers have passed, one final obstacle is heading their way. The famous boulder from Raiders of the Lost Ark (1981) starts rolling straight towards Guests and Indy. Just as it seems like Guests are about to get crushed by the giant rock, the ride vehicle lunges forward and misses the boulder.

Although the ride is only about 20 years old, the Indiana Jones Adventure is an icon in not just Disneyland but within all of the Disney Parks. The attraction has proved popular enough that a version was built in Tokyo DisneySea, with many Guests begging for Disney to bring this attraction to Disney World in Orlando. For years rumors about a potential retheme of DINOSAUR have floated around, with many Guests being disappointed with the ride in Animal Kingdom (I personally love DINOSAUR!).

The Indiana Jones property has proved too popular within the Disney Parks, as attractions based on the film series exist in multiple Disney Resorts across the world. Of course, you have the Indiana Jones Adventure in Disneyland in southern California and another version of the same ride in Tokyo DisneySea. Hollywood Studios in Walt Disney World offers Guests the fantastic Indiana Jones Epic Stunt Spectacular show and Disneyland Paris even has its own Indy-based ride with Indiana Jones™ and the Temple of Peril.

With the upcoming and highly-anticipated fifth Indiana Jones film still in production, it is unknown what the future for the iconic film series will hold. It is well known that Harrison Ford loves playing the rough-around-the-edges archeologist, even more so than the iconic Han Solo character he has also portrayed for many decades. With the release of this new film approaching, Disney could have plans to incorporate more Indiana Jones-inspired rides, attractions, and shows into the Parks and as the Indiana Jones series are some of my favorite movies of all time, I personally couldn’t be more excited. Check out our coverage of the new film here.

Have you had the chance to experience Indiana Jones Adventure at Disneyland? What do you think about the attraction? Let us know in the comments below!