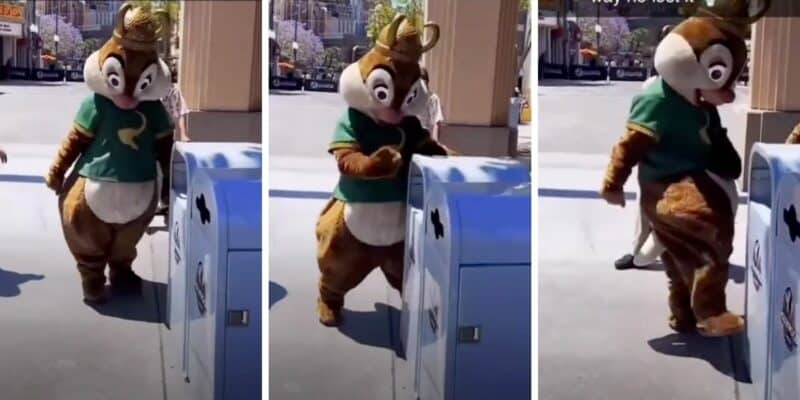 A video is beginning to make its rounds on TikTok showing Dale at Disneyland aggressively kick a garbage can after accidentally bumping into it — in front of Guests.

Related: Loki Transforms at Avengers Campus Based on the Disney+ Series

In Avengers Campus at Disney California Adventure in Disneyland Resort, the rambunctious chipmunk duo — Chip and Dale — meet and greet Guests dressed as Loki and Thor from the Marvel Cinematic Universe. One day, as Dale was coming out from backstage to his meet and greet area. As he was waving to Guests, he turned the corner and he accidentally bumped into the garbage can.

You can see Dale is instantly rattled as he had no idea the garbage can was there. He then takes a step back and aggressively kicks the garbage can. The TikTok video states “I don’t think Disney would approve. the way he lost it.”

It seems as though Dale is okay as he continued on his way after kicking the garbage can. Some may think he was just trying to lighten the mood after the embarrassment of walking into the garbage can while others find his behavior a bit more inappropriate.

A future E-ticket attraction, in which Guests board a Quinjet and head to Wakanda to fight alongside the Avengers, will also open in Avengers Campus at DCA at a later date.

Have you visited Avengers Campus yet? Have you seen Chip and Dale dressed as Thor and Loki? Let us know in the comments below.