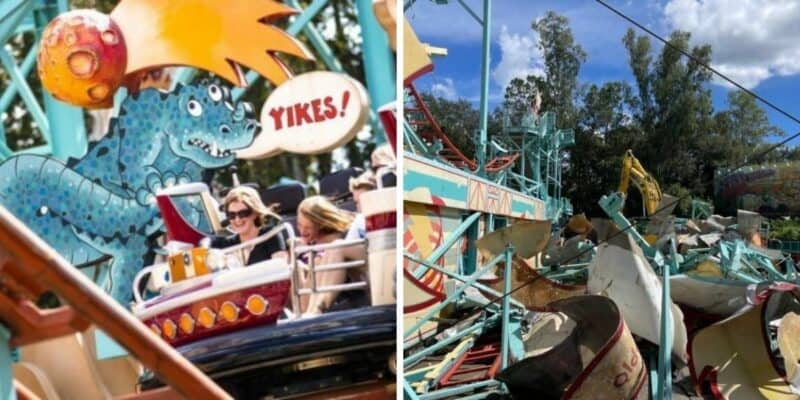 When a ride becomes extinct at a Disney theme park, it’s always a sad day for Guests who still hold fond memories of that attraction.

From Stitch’s Great Escape! and the famous Backlot Tour, to Disneyland’s Twilight Zone Tower of Terror being rebranded as Guardians of the Galaxy: Mission Breakout, there have been multiple losses and changes to Disney attractions over the years at Disneyland Resort, Magic Kingdom, EPCOT, and Disney’s Hollywood Studios.

And over at Disney’s Animal Kingdom, Disney Guests have seen big changes in DinoLand U.S.A., with one particular attraction now becoming officially extinct.

The news came after months of Primeval Whirl, the popular spinning dinosaur-themed coaster ride in DinoLand, U.S.A., remaining closed throughout the summer of 2019 for unknown reasons.

Well, we have confirmation that Primeval Whirl is “not going to make it” (as DINOSAUR fans would say), with its final nail in the coffin now hammered in.

Over the last year, we’ve seen Primeval Whirl’s slow demise, with the track, signage, and theming all getting gradually removed from Disney’s Animal Kingdom.

We’ve been reporting recently how the coaster’s area has gone from just being sealed away to looking like a massive construction zone full of abandoned parts, to now being fully demolished and clean of debris.

Now, Primeval Whirl has been removed from the digital map of Disney’s Animal Kingdom theme park, signaling the final hurdle is complete for the spinning coaster’s removal.

As you can see, the area to the right of DinoLand U.S.A. is now green and filled with palm trees where Primeval Whirl used to sit on the map. The carnival area and TriceraTop Spin can be seen just to the left of this large expansive area.

At this time we, unfortunately, do not know what will be replacing Primeval Whirl at DinoLand, U.S.A., but Inside the Magic will keep you updated as soon as we hear any tidbits from Disney.

Prehistoric fans can still experience the fan-favorite ride, DINOSAUR, or TriceraTop Spin. Guests can also put their skills to the test by playing iconic boardwalk-style games to win a prize.

Walt Disney World’s 50th anniversary celebration is in full swing over in Orlando, Florida, with EARidescent magic everywhere you look.

Disney’s Animal Kingdom has seen the introduction of the brand-new show Disney KiteTails over the waters of Discovery River Theater, the Tree of Life becoming a beautiful Beacon of Magic, and some of the 50 sculptures Walt Disney World will feature to commemorate the 50th anniversary celebration.

Prior to its extinction, the official Disney Parks description of the attraction read:

Are you sad to see Primeval Whirl disappear? What do you think should replace it?