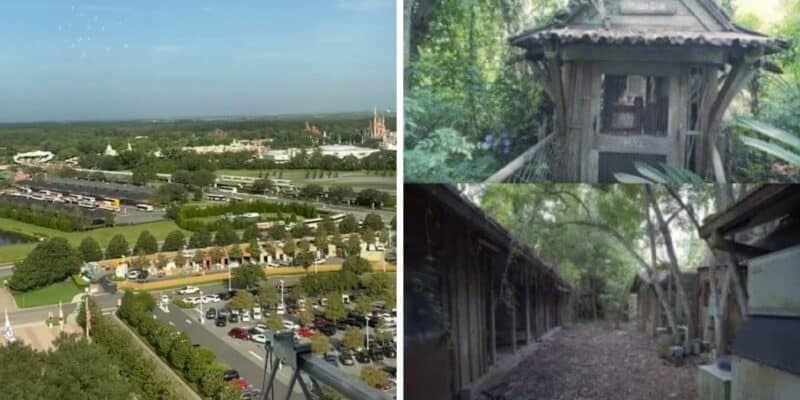 There’s nothing weirder at a Disney Park than an abandoned attraction.

Disney Guests love nostalgia. From the closure of Disney’s River Country to the initial negative response to Disneyland’s Twilight Zone Tower of Terror being rebranded as Guardians of the Galaxy: Mission Breakout, Disney fans have always loved the history of the Resorts.

Now, a Disney Guest has argued that the best view from a Disney restaurant is in fact an abandoned attraction.

With the 50th celebration at Walt Disney World in full swing, Disney has introduced new nighttime spectaculars like Disney Enchantment in Magic Kingdom and Harmonious in EPCOT, both of which made their debut on October 1, 2021.

Disney brought a special dining experience to the popular Magic Kingdom Resort restaurant California Grill specifically for the 50th anniversary, featuring a 3-course tasting experience at Disney’s Contemporary Resort with a view of the fireworks.

Disney also revealed it will be holding a special New Year’s Eve event at the ever-so-popular California Grill Restaurant, with a $700 price tag. Called “A Golden New Year’s Eve in Wine Country”, the December 31 event includes champagne, fireworks, and a speakeasy theme.

Now, The Mouselets have revealed on TikTok their favorite reason for going to the California Grill restaurant, and it’s not for the gourmet food or view of Disney Enchantment:

The Mouselets argue in the video that the best thing about the Contemporary Resort restaurant is the creepy view of Discovery Island:

“The best part of California Grill isn’t the food or the theme park view or even watching the fireworks. It’s the view of Disney’s Abandoned Island.”

The view from the Contemporary Resort restaurant gives a sweeping look at the abandoned island with its overgrown trees in the middle of Bay Lake, but we’re not sure it beats the amazing food from the gourmet chefs!

Prior to its purchase by Disney, it was a hunting retreat and had been known as both “Raz Island” and “Idle Bay Isle” in the early 1900s. The latter was owned by an eccentric man named Nick Nicholson who lived there with his pet crane. When Walt died in 1966, the focus returned to theme parks, and the now-named “Treasure Island” opened on April 8, 1974.

The island contained a shipwreck, treasure, caves, and other pirate-themed items for Guests to enjoy. In 1976, the island was renamed Discovery Island after being recognized as a zoological park.

Discovery Island closed to the public on April 8, 1999, exactly 25 years after its opening. Due to the opening of Disney’s Animal Kingdom theme park in 1998, the animals on the island were relocated and the island was left abandoned.

As of 2021, all of the original buildings and attractions remain on the island, though several have sustained major damage from hurricanes and become overgrown.

As The Mouselets reveal, the island can be seen from California Grill, Walt Disney World Monorail, Disney’s Wilderness Lodge, and Disney’s Fort Wilderness Resort & Campground, as well as from boat trips between them.

Back in 2020, a Florida man was caught camping on the abandoned Disney island, and accepted a plea deal.

42-year-old Richard McGuire was arrested after he was found on the overgrown Discovery Island.  McGuire said at the time that he considered Discovery Island to be a “tropical paradise.” He had been camping there for days and had planned to stay for at least a week before he was caught, though he claimed he was unaware that the area was off-limits.

The official description for the popular restaurant reads:

Savor the finest in Californian cooking, as you take in the sights of Seven Seas Lagoon and Magic Kingdom park.

Step into a bygone era as we usher in the 50th anniversary of Walt Disney World Resort. Evoking the spirit of 1971, California Grill celebrates its past while offering a nod to the incredible future ahead.

Sit down to a 3-course tasting experience offering dishes designed to bring this celebration to life.

Plus, get a taste of something truly spectacular to go with your delicious meal—a special viewing of Disney Enchantment. Watch this all-new nighttime extravaganza from the 15th floor of Disney’s Contemporary Resort. This fireworks spectacular takes you on a journey beyond the ordinary and to a land of magic.

Did you ever get to experience Disney’s Discovery Island?  the overgrown