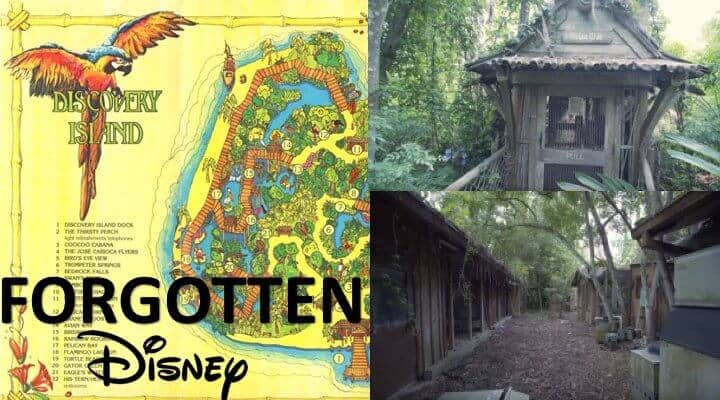 As Disney fans, we’re bound to attach reverence to the old, the vintage, the iconic. Just look at the mixed response from fans when the Twilight Zone Tower of Terror was rebranded as Guardians of the Galaxy; Mission Breakout.

One of the most interesting and mysterious attractions in Walt Disney World history is Discovery Island. It stands shoulder to shoulder with other forgotten attractions like the abandoned water park; Disney’s River Country and the rejected land of Beastly Kingdom within Disney’s Animal Kingdom. Discovery Island is one of those enticing and nostalgic pieces of Disney history that begs to be revisited.

What is Discovery Island?

Located in Walt Disney World’s Bay Lake, Discovery Island is a large landmass that has been a part of the resort’s history since it began life as the Experimental Prototype City of Tomorrow, way back when Walt’s mind was on urban living, not theme parks. It is entirely isolated and can only be reached by boat.

Prior to its purchase by Disney, it was a hunting retreat and had been known as both ‘Raz Island’ and ‘Idle Bay Isle’. The latter was owned by an eccentric man named Nick Nicholson who lived there with his pet crane.

When Walt died in 66′ and the focus returned to resorts and theme parks, what was then named ‘Riles Island’ was transformed into an attraction with a pirate theme named (what else); Treasure Island. It opened in 1974; three years after the launch of Walt Disney World.

The attraction could be reached by shuttle boat and was designed to entertain guests for about half a day. The island contained a shipwreck, treasure, caves, and other pirate themed paraphernalia for guests to enjoy.

Two years later in 1976, the island was renamed Disney’s Discovery Island. The mouse thought the island needed a facelift, and its focus changed. Now Discovery Island was a tropical paradise; a nature preserve where guests could observe rare flora and fauna.

The new island was a haven for all kinds of animals including rare species and exotic birds like bald eagles and vultures. It would’ve been quite something to be able to walk along the Discovery Island trial and observe these creatures in their natural habitat.

In three words; Disney’s Animal Kingdom. After this revolutionary safari-meets theme park launched in 1998, Discovery Island became superfluous. All of the animals were relocated, the exits were sealed and every shop, attraction, and pit-stop were closed. The island was left completely abandoned and forgotten and closed for good on April 8th, 1998 on its 25th birthday.

Amazingly, it was at one point considered to be transformed into Myst Island, as Disney considered teaming up with the developers of the video game of the same name to transform it into an interactive Disney property, perhaps one day part of a wider Myst-themed park.

What is on Discovery Island now?

Bar an overgrown mass of wildlife? Not much. The buildings are surprisingly un-demolished, though most have been consumed by the wildlife. There have been sightings of fresh coke cans and other contemporary litter, and urban explorers (read: trespassers) are surprisingly common. Disney has been tight-lipped on the state of the island, though rumors of re-development have been circling for years.

Sadly our only glimpse the island is gleaned from said urban explorers who illegally break into the site and take footage. What they capture doesn’t show much, with the exception of the occasional artificial light or fence that suggests that staff still occasionally check in.

You can still see it from a distance, with the best views coming from Disney’s Contemporary Resort and Wilderness Lodge. The abandoned Disney’s River Country is also a mere 600ft from the island.

In theory, you could rent a kayak or motorized boat from Fort Wilderness to explore Bay Lake for yourself to get a closer look. Make sure you don’t dock at the island though, as it is sealed off and exploration is completely forbidden.

This isn’t just because it’s an out of use attraction that embarrasses Disney; its health and safety standards are not maintained for guest use (obviously). So don’t be a dingus; watch it from afar.

Discovery Island was an iconic part of the Walt Disney World resort for 25 years. It even marked the last sighting of the now-extinct Dusky Seaside Sparrow and was a fan favorite of many early patrons.

Personally, I find it fascinating that such a well-loved attraction just sits there, slowly being taken over by nature. I would love to one day see Discovery Island re-opened. Wouldn’t it be an awesome spot for a new hotel? Or maybe a Jungle Book or Tarzan themed attraction? Discovery Island begs for a new lease of life as a Safari Village or trail attraction.

Either way, there’s no word on the future of Discovery Island right now. It seems that Disney has no plans to develop or re-model it any time soon. Youtuber Bright Sun Films spoke to a Cast Member who said that any Disney employee caught on the island will be dismissed on the spot; Disney officials are serious about security.

All of this just adds to the mystery. Why not just strip the island of its buildings and features? Or why not re-work it altogether?

Whatever the case, Disney’s Discovery Island is an interesting bit of forgotten Walt Disney World history. It’s fascinating to find Disney parks like this abandoned island that have been left to rot. It’s mad that this forgotten land sits comparatively close to the Magic Kingdom, in Bay Lake, totally forgotten.

All that remains now is its name. Discovery Island is appropriately a part of Disney’s Animal Kingdom and home of the Tree of life, an ironic and perhaps fitting end for this forgotten zoological park.

Did you visit Discovery Island in its prime? Does it have a place in Walt Disney World now that Animal Kingdom exists? Let us know what you think of this abandoned Disney island in the comments below.